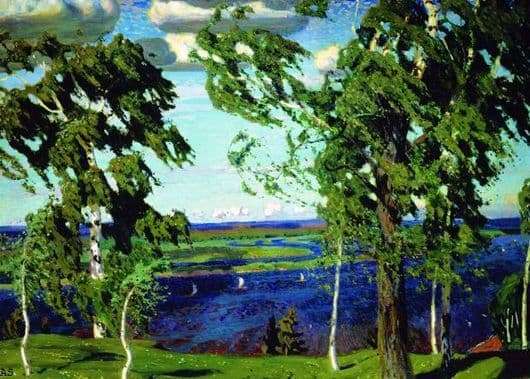 1904, the year of great changes for Russia, the Russian-Japanese war rumbles in the distance, and a revolutionary storm is brewing very close, ready to devour everything around. It was during this period that Arkady Rylov painted his picture – “Green Noise”.

In the foreground of the canvas one can see trees, birches and oaks, which bend under the gusts of a beginning storm. The old ones stand firmly and young trees are leaning to the ground, everything trembles and breaks under the strong wind. In the background one can see the river, on the darkening surface of which several sailing boats can be seen, which apparently are trying to quickly escape from the approaching hurricane.

Already there are real huge puffy clouds, ready to spill in heavy clusters over the green fields. And the distance is still completely clean and undisturbed, there are no signs of a storm, only here, and it seems to the casual viewer, who stopped in front of the picture, that he himself senses gusts of wind, and the first signs of rain, the smell of dust and falling leaves.

Nature in its irrepressible rage is beautiful and delightful, it attracts the gaze of anyone who looks at the picture. Everything is clean and bright, and in the distance one can see such blue azure that it captures the spirit and worries the heart.

The artist managed to convey all the indescribable beauty of spring nature, all the best that is in it, and good and evil, all shades and colors, all the colors of the rainbow, everything merged right here in this picture so that the true artist’s brush could capture them. After all, only with the help of true talent you can draw so beautifully, as if this is not a drawing at all, but a perfectly chosen angle for a modern photo, therefore, many admire the picture, rightly believing that modernity rarely gives rise to such talents. And this is true, since the past century was golden, and before that was silver, and our century, until it deserves anything like that, since there is no second Arkadiev Fedorov in it, as well as other writers.