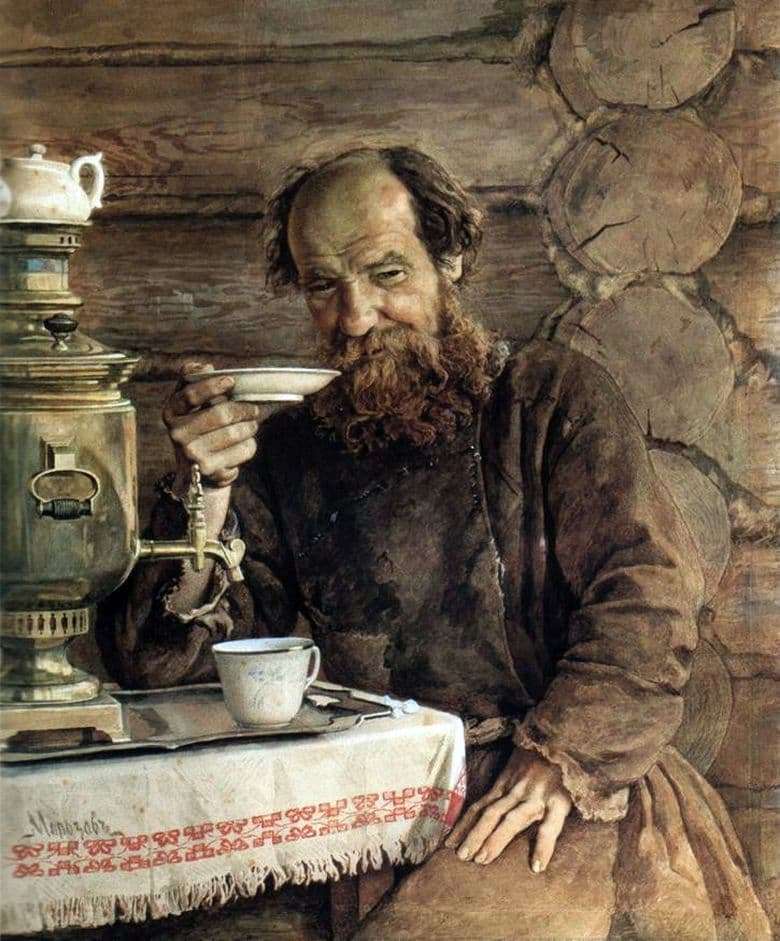 Russian artist Morozov wrote truly beautiful paintings, each of which is different and has its own charm and zest. Despite the fact that Morozov did not leave many pictures, they are still remembered by the audience for their skill and ease. The works of the Russian artist are represented in famous museums and occupy a special place in art galleries. One of such works is the painting “For tea drinking”.

On this canvas, depicts a man with an open Russian soul who drinks a healing drink – tea. Morozov in the picture tried to show the whole Russian spirit in detail and detail. Hot and fragrant drink encourages the viewer to become a participant in this meal and open your soul to this good-natured old man. In the picture you can see the ease, simplicity of the Russian people, who are not important material values. Such a conclusion can be made if we consider the background of the picture “For tea drinking”. In general, despite the bare walls, which have not seen repair and plaster for a long time, the old man is still satisfied with life and enjoys a fragrant and warming drink. The artist intentionally shows the whole originality and real state of a person living in the village. Morozov does not see the need to artificially decorate the room, because the soul of man,

The artist draws attention to the person as an individual, and this can be seen in the picture. For example, in the work, an old man is depicted in close-up, which is striking, and only then you can see the details of the village hut. The man looks at ease and gently, even with some sly, prompting the viewer that he has the wrong idea about the villagers. The old man shows genuine joy and is not afraid to work. Interestingly depicted the face of a man with a red mustache, curly hair and callused hands. Looking at the picture, you can feel the very spirit of the Russian people, which is legendary.