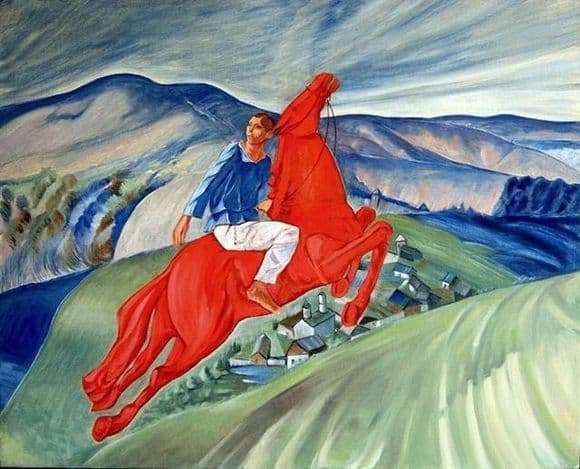 The works of Kuzma Petrov-Vodkin became a weighty contribution to Russian painting. His outstanding work – the painting “Fantasy” with color and motifs echoes other famous canvases.

However, “Fantasy” is unique and unique; the feelings and thoughts underlying it are characterized by a strong emotional charge and depth.

Date of creation of the canvas – 1925. The artist in the bloom of creative power is the world a new masterpiece. The backdrop is the landscape of nature with the urban landscape. Brush strokes are smooth and rhythmic. Background colors are calm, match the natural. Green, blue and shades of brown diluted with white stripes.

The central hero of the picture is a young man sitting on a scarlet horse. The bright red color of the horse captures the main attention. It appears as a revolutionary, fiery, swift color. The figure of the animal hovered in the jump, it seems to hover above the ground. Red horse is interpreted as a symbol of the October Revolution itself. This event was so significant for the Russian artist, and for the fate of the country.

Unusual is the nature of the composition. In the picture there are practically no strict horizontal and vertical lines. Instead, the painter took the inclined axis as a basis. The mountains, the outlines of the plains, even the feathers of the clouds are lined up chaotically. The effect sets the dynamics for the image and makes the whole space of the composition spherical.

The symbolic painting of the authorship of Petrov-Vodkin perfectly reflects the mood of the era. The red horse as a sign of a new fiery revolution, is in the picture “Fantasy” aspiring to the heavenly heights, to unexplored discoveries and tops.

The simple and concise background is combined in the picture with a fantastic main figure. As a result, the image seems poetic, sublime and mysteriously attractive.