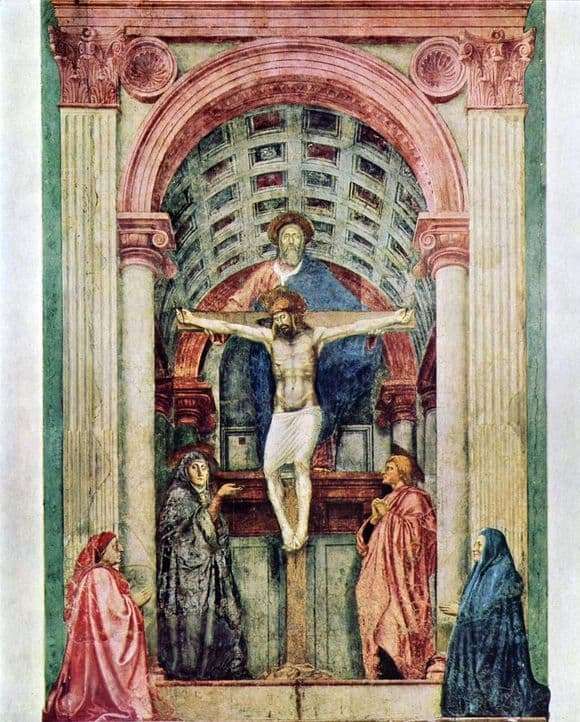 This famous fresco by Masaccio became famous thanks to the innovation in depicting elements of architecture and a completely new vision of perspective.

We see Calvary and Christ crucified. He is supported by God the father. In the legs there is a sarcophagus, which contains the skeleton of the first man on the land of Adam.

On both sides are St. John and the Virgin Mary. A little lower is the donator in a red cloak and his wife. It is even known what the name of this donator was. Presumably this is Lorenzo Lentsi.

All the works of Masaccio are incredibly embossed. It was he who laid the foundations of the Renaissance. Painting need to be as we actually see. At that time, such an idea was truly revolutionary.

The painter depicts the vault in a certain way. He shows us a linear perspective. In those days, painters loved this technique. The composition is constructed so that all the trajectories are connected necessarily at one main point. It seems that we see everything depicted on a flat line. As you remove, all characters and items decrease. The artist loved architecture in its classic form. That is why the canvas so skillfully traced columns. About the same passion and speaks set, prescribed to the smallest details.

Silhouettes are modeled in relief. This is necessary in order to create a sense of reality of all that is happening. We practically feel our presence in the space of this grand fresco. Before that, the painting simply did not have anything similar.

The painter conveys the dynamism and drama of everything that happens with the help of gestures and special facial expressions of each character. Due to this, he managed to achieve such a strong impact of his paintings on the audience. The most simple techniques allow you to create a real impression that the forms in space are as plastic as possible.