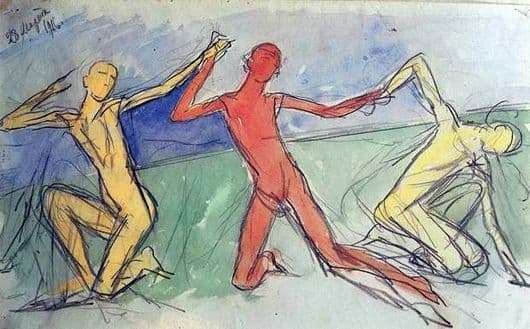 The work of the Russian artist Kuzma Sergeevich Petrov-Vodkin is filled with philosophy and nationalist thoughts. He lived in a difficult time for the Russian Empire, which could not but reflect on his work. In his art, the Russian artist chose a thorny path, constantly being criticized either from supporters of academic painting or from innovators. But at the same time, Kuzma Sergeevich was able to preserve the originality and he was destined to become a bridge that connects different times and eras.

Petrov Vodkin enthusiastically met the February and October Revolutions of 1917, the picture “Boys”, written in March 28, 1916, speaks about this. With his pre-revolutionary picture, the artist presents to the viewer a hero from the ideological “red” ones. He placed it at the very center of his picture, depicting with his hand raised up, dragging along ordinary people. The hero on the left is already ready to join the revolutionary movement – this is indicated by his pose and gesture ready for battle, saluting, raised up to the “red” hand. And the man on the right is still sitting on the ground on his knees, bowing to the old regime, but he has already given his hand to the “red” and is about to get up from his knees.

In this picture, as in most others, Kuzma Sergeevich observes the clarity of colors characteristic of his work. A year after the October Revolution, on the anniversary of October, Petrov-Vodkin wrote a whole series of paintings, having decorated, with the help of his students, the entire city of Petrograd. Having the experience of the masters of the Renaissance, Petrov-Vodkin remained deeply Russian and national artist. In his work “The Boys”, as in all his other paintings, there is a real Russian spirit. With Petrov-Vodkin, everyone can discover something new,