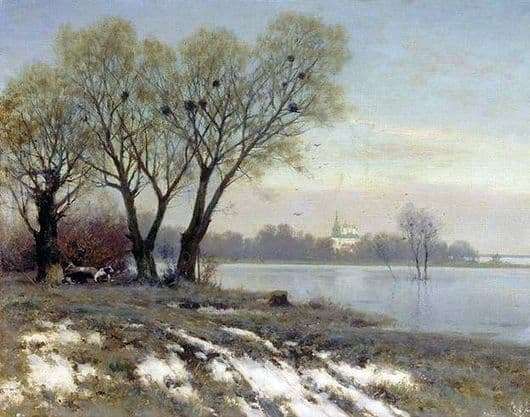 The snow has not completely descended from the ground, the water has not gone away after the flood, but the trees have either buds or young foliage and huge blackening nests of crows or other rather large birds. Or maybe it was the rooks who had time to prepare their homes. Under the trees, the cows lay down on the earth, heated by the mean rays of the sun. But still this first warmth gives them incomparable pleasure after a cold winter.

Behind the cows are bushes with last year’s red foliage. So they, apparently, and stood for the whole winter, and now beautifully shade the brown earth and the first green.

So the artist Konstantin Kryzhitsky sees the early spring. And on his canvas, which is called “Early Spring”, an amazing sky, this can only be seen in April or May.

The freshness and purity of spring echoes in the canvas with spiritual purity, and the temple, lost in a light haze, reminds of this. Its white walls are illuminated by the sun, on the golden domes of the glare, but the green roof looks most bright in spring. She is barely brighter than young grass.

But a little closer to the temple – the same tall trees with nests. They stand on a very small island, and everything around is flooded with water, which extends into the distance. The picture is notable for its expressive depth, well-planned plans.

At first, it is perceived as flat, as the view falls on nearby trees, but then you notice cows under them, and suddenly a wonderful panorama opens, full of quiet joy and thoughtfulness at the same time. Like many other works by the artist, this one looks very realistic.

It seems that the wind will blow, and the branches will start to stir, the bushes will rustle, and the water will become even more dimpled. And only the remnants of snow remain motionless, recalling the recent blizzards.