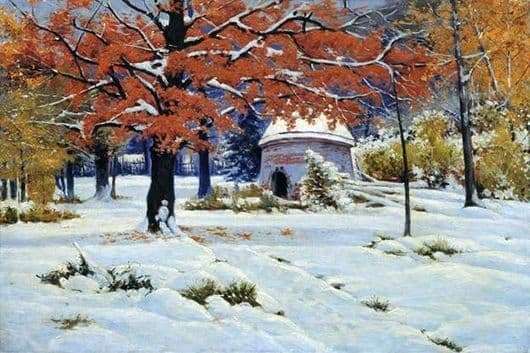 Very beautiful canvas, with the most accurately disclosed theme. After all, it would seem, only yesterday the leaves on the trees were blackened, only yesterday it was pouring rain and the wind was rustling. But in the morning the snow fell, the first early autumn snow. And he tried to wash away all the beauty of the golden autumn, wipe out the earth, become the absolute master of the situation. But autumn just does not give up, and because a lot of it remains in a reminder of it.

Oak with golden foliage, trees, even the grass is not faded and has not disappeared, but on the contrary, it is slightly nailed with snow. A little more and the snow will melt, because it is also called the earliest that it lasts not long, and as a rule after it begins the warm Indian summer. But the trees while trying to get rid of their foliage as quickly as possible. This is the pledge of the future of the tree and the absence of leaves – these are trees, only for joy. The canvas breathes nature, the canvas delays in meditation, the canvas makes you feel a little sad. But only a little, because winter is coming soon, and this means that there will be at least happy days.

The nature in this picture just breathes some kind of unknown powerful natural spirit. It’s not winter yet, but not autumn anymore – the magical time of the golden mean. People do not always calmly endure such a balance and therefore try to be at home on such days. Under the oak tree, the wind had already “swindled” and sketched leaves from the tree. On white, the fiery red oak foliage looks beautiful. The grass now and then peeps out from under the snow. Shrubs and trees ate drowned in the snow, but this does not mean that they hibernate.

Autumn has not gone forever, it will remind of itself several times, either by rain or by cold wind. And even the morning blue does not give the darkness of the canvas, but rather mystifies a little. And the sun, a little cooled to the ground, wearily illuminates the garden. No, all the same, an amazing and beautiful inter-time… How many emotions, how many hopes gives us such a state of nature.