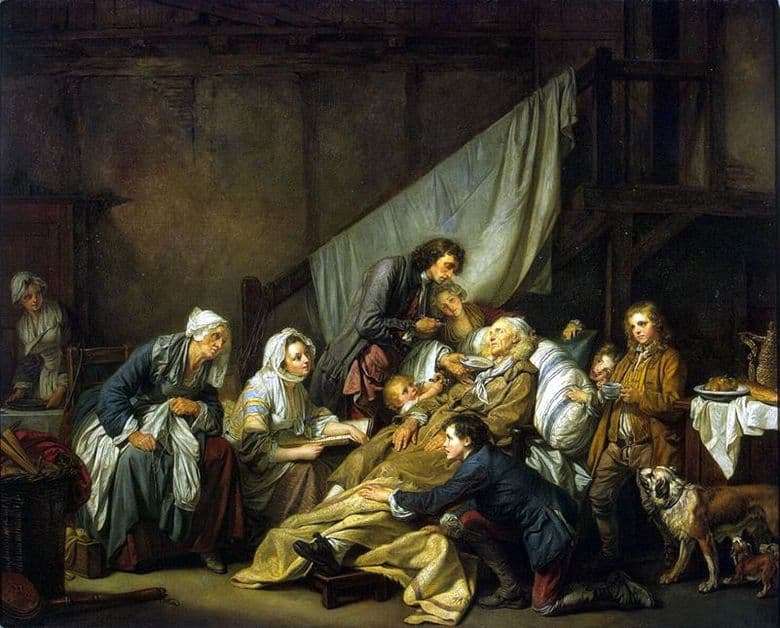 The painting “Paralytic” is written in the best traditions of the Enlightenment. It perfectly combines the talent of the artist, the dynamism of the image and the didactic character of the plot. The painting of Jean-Baptiste Greza is touching and eloquent at the same time. On it, he captured a friendly family caring for a paralyzed older relative. The expressions of those present are directed to the sick old man. Their posture is inherent in some theatricality. But it is precisely this technique that makes it possible to convey light feelings towards an older family member.

In the eyes of those present read sympathy and tenderness. Each of the characters depicted in the picture tries to be useful to the paralytic. Women read to him and listen attentively to what he says. One boy straightens a pillow under the back of an old man. The second brings him a cup. Another one covers the legs with a blanket. A very tiny baby wants to show the old man his toy. A man is feeding a patient with a spoon. Characteristically, the old man brings a plate of food to a woman. This gesture, unusual for a man, speaks about how much the hero loves a relative.

In the right corner of the picture you can see a feeding dog, to which its puppies cling. Even she shows interest in the suffering and becomes a symbol of kindness and loyalty.

The decoration of the room and the vestments of the heroes of the painting suggest that they live modestly. But material poverty is more than compensated by spiritual wealth. This family is a single whole, and all its members as one esteem the elder and do not leave him even with an incurable illness. This is the didactic meaning of the work. Jean-Baptiste Dreams attached great importance to morality. Respect for elders was the promise that the artist sought to convey to his contemporaries and future generations.