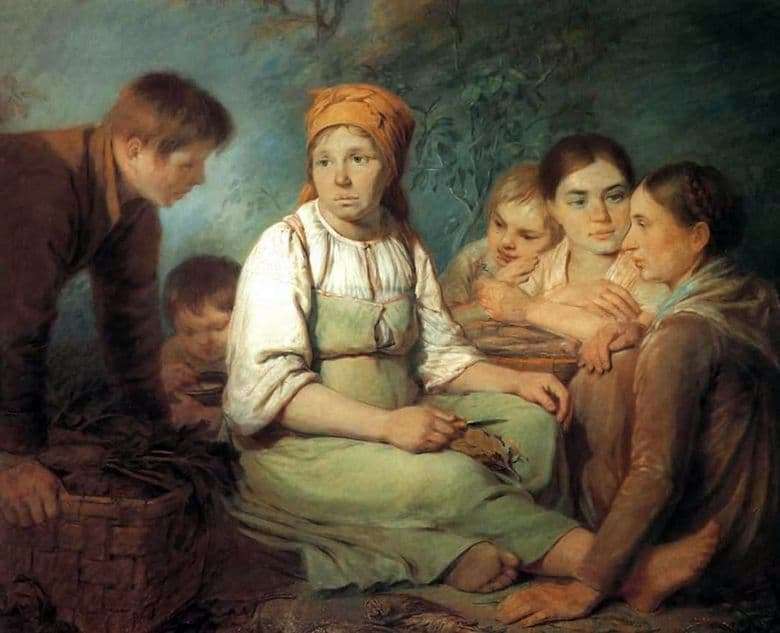 Alexey Gavrilovich Venetsianov became famous primarily as the author of genre paintings, which brought him fame. The genus Venetsianov originates from immigrants from Greece. The family of the future artist traded saplings and tulip bulbs, but there were also paintings for sale in their shop. Probably for the first time young Alexei became interested in pictorial art precisely because of the availability of these works in direct access. With his paintings Venetsianov glorified peasant labor, showed the physical and moral beauty of Russian peasants. Portraits of the artist also had success with his contemporaries.

The painting “Cleaning Beet”, like many other works of the author, tells the viewer about the importance of work, about the importance of the usual everyday affairs. In fact, before us is a group portrait of peasants. The work is done with pastel on parchment – this technique gives the canvas the necessary softness, tenderness and picturesque. This work by Venetsianov opened a new chapter in the history of the fine arts of Russia – Alexey Gavrilovich was the first to take genre paintings seriously, performing them in detail and portrait.

In the center of the picture is a young peasant girl, pretty, barefoot, a little tired from hard work. She interrupted her work for a while – probably the boy who was leaning toward her reported some unpleasant news. In the right corner – two more girls and a teenager, in the background – a child with a bowl of food. Virtually the entire space of parchment is filled with human figures, and only in the spaces between them there is a conditional landscape background. The emperor paid the artist for the “Beet Purge” a record amount for those times – one thousand rubles. The picture was immediately placed in the Diamond Room of the Winter Palace.