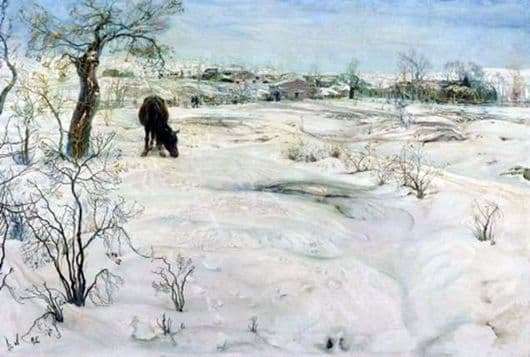 Isaac Vasilyevich Brodsky was born and lived at the junction of two centuries, because he belonged to that generation, which found more times of royal power. But unlike many of his comrades in skill, he decided to stay and create in a new Soviet country, and for good reason, because he deserved fame and recognition for his magnificent works.

The artist painted mostly portraits, but at the beginning of his artistic career, which accounted for 1917-1922, he preferred to depict natural beauty, probably due to political differences at that time. The artist sought to show how beautiful Russia is, Russia without wars and murders, without that, all that people cherish, and apparently for this reason there are no people in his paintings of this period, only endless beauty and animals.

A typical example of such a painting is the “Winter” canvas, painted around 1922. The picture depicts the usual Russian winter, not very harsh, but not warm. In the foreground is the snow-white smooth surface of the field, then a tree, near which stands a horse, trying to find something in the snow. Judging by the thawed patches, there is a thaw, because in the distance, in the background, in front of a small village, gray earth is visible.

Everything in this picture is so vivid and real that it cannot be said that it has practically turned a century. And the terrible events of the beginning of the last century were reflected here, visible only to an experienced connoisseur of history, because a horse that chews grass in a meadow is a common thing, while a horse trying to find it under the snow signifies a sign of the ensuing famine that tormented the young Soviet state the years of its formation.

But as has already been said, such nuances are not noticeable to everyone, most, some of the people, simply admire the beautiful landscape that has arisen due to the skill of the artist.