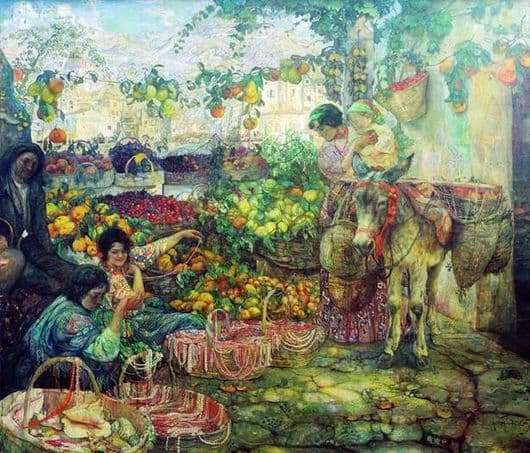 Many great painters tried to portray this state in different ways. Who landscapes, who abstractions, who simply genre scenes. The artist Brodsky has collected on his canvas everything that can somehow characterize Italy. See for yourself, sultry women, a riot of fruit and vegetables, national crafts – beads. And of course the canvas is saturated with the air of Italy.

An unusual market is shown to us, it is most likely a small platform between houses where local companions trade. There are many grapes in the baskets (Italian winegrowers are considered to be the best masters in winemaking), a lot of peaches and pears. Bargaining is intensive, but it is not necessary to buy something. It is enough just to stand by and talk, and there is always something for the Italians to talk about.

But what immediately catches the eye is that the market is clearly not urban, it is most likely a province. The background can be seen mountains and houses on the hills. Yes, and dressed as a saleswoman is not in the city, and the buyer with the child too. Moreover, it is clear that she buys products for herself, but she lives at the same time clearly not in this town. Probably somewhere in the mountains. That’s because the donkey is so much loaded. Italians are thrifty people and, moreover, very well able to cook. Only therefore the donkey is so loaded with the goods.

An extra trip to the city is a waste of time and nerves. Therefore, it is better to buy everything at once, and do not forget about trinkets. This is how it is so easy, in one canvas, Isaac Brodsky collected his impressions of Italy, which not only spoil things, but on the contrary, calls to visit this place and try to understand these Italians. But how everything is powerful and beautiful, juicy, depicted on the canvas.

Only one thing can be said about Brodsky – it’s a miracle that he didn’t get into the repressions. But it is his grief that once he started writing Lenin, he did not stop there and spent all his wonderful talent on socialist realism, the direction that only destroyed it. He no longer returned to the landscapes, he painted the leaders. And thus he lost several important friends in his life, and most importantly he lost his talent, becoming a simple copyist craftsman.

← Monument to the book in St. Petersburg
Description of the painting by Alexei Stepanov “Bear” →