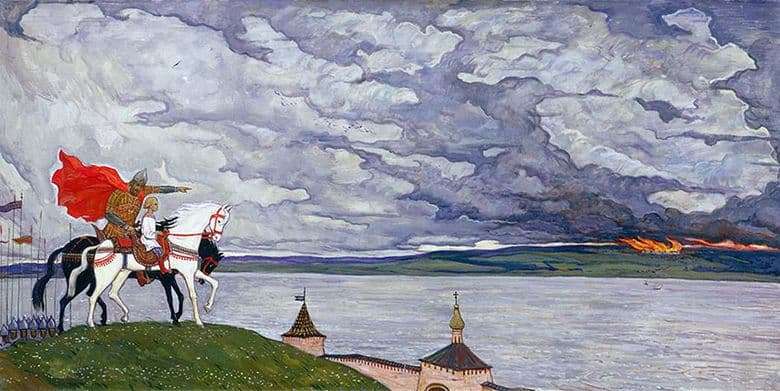 This picture was painted by I. Glazunov in 1964. The plot is connected with the glorious manly pages of Russian history – the whole essence of the Russian people, its unbending power and strength, are merged into this deep-seated image of the Russian land, its vast, boundless spaces and will.

On the right side of the picture, in the depths of it, between the bank of the river (in the foreground) and the hanging clouds, dark clouds that mixed with the dark thick smoke, there is a huge conflagration. There is burning settlement, set on fire by enemy hordes (judging by the costumes) of the Mongol-Tatars. On the river, near the shore of the fire there are a couple of small boats. There are no people in them – apparently there was no one left in the settlement: someone was killed, someone was hijacked.

It is symbolic that the wind drives these dark, menacing clouds along with black smoke towards the opposite high bank.

Like clouds of enemies strive to capture all of Russia, to conquer it.

The wide river is the boundary between good and evil. Its waves are restless, resist invasion. These menacing dark clouds are reflected in the ripples of the river, and the waves seem to be trying to disperse them.

In the left part of the picture, on a high hill there are two horsemen: the prince himself and his son, who is ten or twelve years old. The prince in the mail, on his head a helmet. The wind is waving a scarlet cloak behind him. The prince with his hand points to the opposite shore, in the conflagration, so that his son remembers this sad picture, says: “remember what you see, do not be afraid, we will win! Do not surrender to the enemy, beat him, son! “.

Glazunov in this story embodied one of his most important ideas; the inextricable link of generations, their continuity from father to son. We must remember all our history – tragic and victorious, any: this is our history, whatever it may be. Remembering our history, we are invincible, and Russia will not perish, but always rushes into a future that no one can take from it.

The hill with two princes is protected by a high, solid fortress wall, on one of the watchtowers of which the Russian flag flutters, and on the other one can see the dome of the chapel. Faith and Motherland – the concept of a single, indivisible. This is what leads to victory.

And a little away from the princes, hid for the time being Russian soldiers. They are just waiting for a signal to rush into battle with a shout of “Uraaa!” And drive the enemy out of their native land.