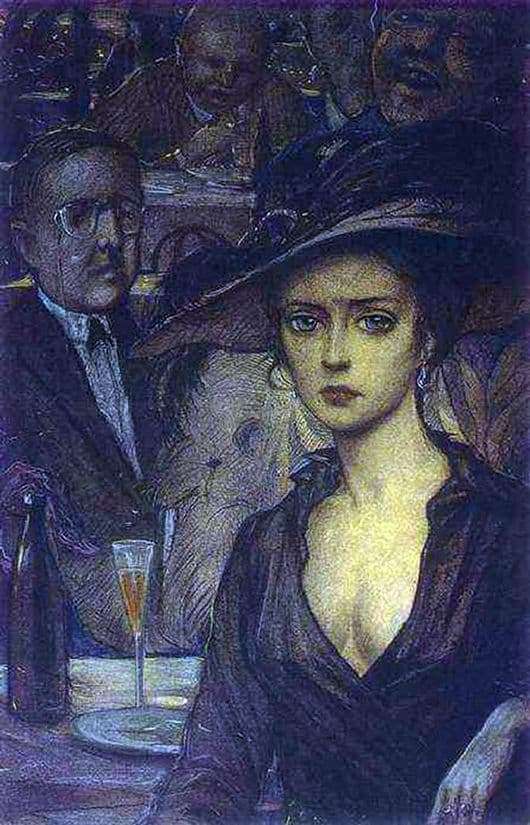 The painting by Ilya Glazunov called “The Stranger” was created as an illustration of A. Blok’s poem of the same name, with which they lived at the same time, and very often intersected under different circumstances.

As seen in the picture, the mysterious girl is at some feast, but she clearly feels superfluous at this event. Unlike the people who are in the background, but at this time they create a general background and image of the picture, the girl’s face does not show a drop of joy. She is pretty, decently dressed, but her big eyes are filled with sadness, and sometimes it seems that she is looking straight into your soul and is listening for help because of her own hopelessness.

But still it is worth noting that Glazunov fulfilled the incompleteness of doubt in this image. This is due to its deep cleavage and the general excellent way that does not fit in with the general atmosphere. Therefore, it is not fully understood how this girl got here, and what she is waiting for in the future.

At this time, the poet describes her look as heartfelt and thoughtful, as if this girl dreams of high feelings, which she for some reason has not yet comprehended. Her image is very light and almost weightless, this is achieved not only due to the very drawing of the character, but also overweight, gay people who cause disgust that are in the background.

It is not the disclosure of the image to the end that makes it even more mysterious. In this case, the artist lures into the game the disclosure of the image of each viewer. Details such as the rings on the left hand, its deep neckline, or the people around it, make it necessary to complete the image and uncover all the secrets of this masterpiece. The illustration to the picture is best viewed along with the reading of the verses to it, thus achieving maximum integrity of perception.