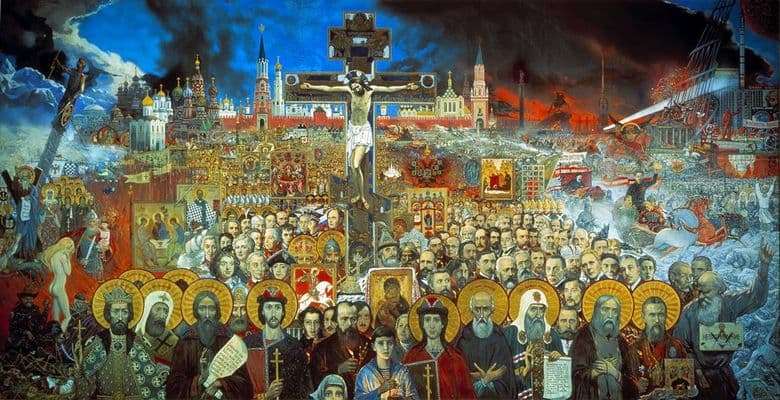 Ilya Glazunov is a modern Russian artist, public figure. The painful fate of the artist (his parents and all his closest relatives died in Leningrad during the blockade, when the boy was only 11 years old) had a great influence on all his work. Glazunov was inspired by strong emotions, passions “according to Dostoevsky”, almost every of his paintings is imbued with sadness and tragedy. In Soviet times, the artist’s work was often criticized. The exhibition on which the painting “Roads of War” was exhibited (with the image of the retreating Red Army) was closed, and the painting itself was destroyed. The first works of the author are made in a classical, academic manner. Glazunov was often ordered by portraits of famous cultural figures and politicians of our time. But the main theme of the artist’s work is Russia and its history. Trying to find your own

The painting “One Hundred Ages” (another name is “Eternal Russia”) is perhaps the most famous and most ambitious work of the artist. The size of the canvas – 3 to 6 meters, and it can be called a kind of history textbook. On one canvas, the whole being of Russia for a thousand years is depicted, all significant historical and political figures of the state during this time. Each portrait is instantly recognizable, deeply historical and carefully written. The first thing that catches your eye is the originality of the composition. The picture is similar to a symphonic work, where each written image is important and combined into a single work. In the upper left corner of the picture is Mount Kharaiti, according to legend, a sacred place for the ancestors of the ancient Slavs. A little to the right shows a group of Orthodox churches, collected from different ends of immense Russia. Black clouds are gathering over the golden domes, Recalling the difficult times in the history of Russia. In the center of the left part of the picture – Andrew the First-Called and Princess Olga. The difficult and tragic moment of the Mongol yoke is reflected in the lower left corner – the Slavic warriors are defeated, Khan Orda feasting on their bodies. The naked maiden, put up for sale in the slave market, is, according to the artist, a symbol of the tragedy that has befallen the country.

The central part of the canvas reflects events in Russia before the 1917 revolution. In the foreground – F. M. Dostoevsky, the favorite writer of the artist. It was Dostoevsky who considered Glazunov to be the main national treasure, and his works most accurately convey the Russian national spirit. Right before Dostoevsky, Tsarevich Alexei, heir to the throne, who died at the hands of the Bolsheviks. In the very center of the picture, at the foot of the cross with Christ crucified, is the founder of the royal dynasty of Mikhail Romanov, next to him is Ivan Susanin. The right side of the canvas is given mainly to cultural figures. The portrait of Leo Tolstoy stands out on the plate he holds, the main motto of the writer is “Nonresistance”. In the upper right-hand corner there are figures sending the viewer to the time of the October revolution; the scarlet glow, the crimson figure of Lenin, the Bolshevik slogans. Below in the apocalyptic “three” sits Stalin. The horses’ hooves are about to trample the bent woman in a sheepskin, clutching an infant child.

The style of the painting reminds of Old Russian icons – the painting genre, deeply loved and appreciated by Glazunov. Dedicated to the millennium of the baptism of Russia, it became the most amazing project in the history of Russia. The historical characters depicted by the creator are presented in the form of an endless religious procession, a large-scale religious procession, overshadowed with church banners and icons of the Mother of God with Christ. The picture was sold around the world by hundreds of thousands of reproductions, and at first the long lines of admirers of the author lined up at the exhibitions where it was on display.