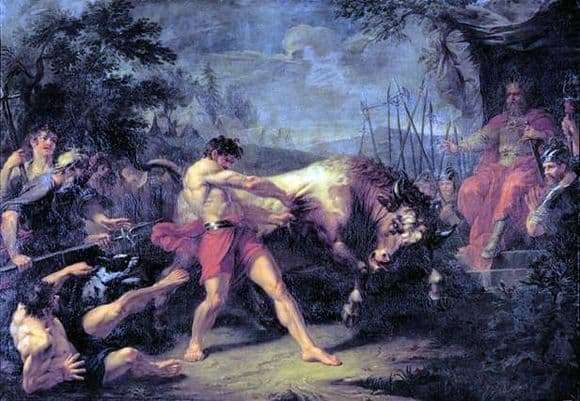 “Testing the strength of Jan Usmar” belongs to the brush of Gregory Ugryumov, famous for his historical paintings. It is thanks to this work that the artist was awarded the title of academician. Today this bright and dynamic canvas is included in the collection of the Russian Museum in St. Petersburg.

The plot is based on one of the stories “The Tale of Bygone Years”, affecting the events of 992 years. Kiev was besieged by nomads, and the fate of the then capital of Russia was to be decided by the duel between the best fighters of the enemy armies. Wanting to be honored to fight an enemy warrior, the son of a tanner, Jan Usmar, arranged a demonstration battle with an angry bull. The warrior managed to stop the animal on the run, tearing out a piece of skin. The subsequent battle with the Pechenegs was marked by the victory of the army, the then ruling Prince Vladimir Svyatoslavovich.

for the first time that Grigory Ivanovich appeals to the national-patriotic theme in his work. It is worth noting, in general, the artist’s zealous desire for a reliable depiction of details. The skillfully traced armor and weapons of the warriors, the clothes of the inhabitants are accurately recreated on the canvas. However, in the warrior’s ammunition on the right can be traced the ancient history and echoes of the Roman era. This is due to the traditions of the masters of the Academy of Arts, referring to the monuments of the classical past when writing historical scenes. In addition, the period of painting was not the best time for archeology, and the master simply did not have the opportunity to study in detail the outfits and images of the ancient Rus.

The predominance of ancient traditions, as one of the main components of classicism, fully embodies the figure of Jan Usmar. The image of the main character Ugryumov wrote from Tatarin Yuzey, who was athletically complex and stood out with perfect muscles. The master does not hide the powerful figure of Yana, but only emphasizes with a red cloth, like a flame encircling the camp and hips of a warrior.

All the power and dynamics brilliantly conveyed thanks to a clearly built composition of the main actors. Yang Usmar balances the impressive carcass of a bull tearing from his hands. The prince, who was seated at a distance, slightly got up, seized by the unfolding battle, and hurrying to greet his warrior. In the background, in anticipation of another decisive battle with the Pechenegs, guerrillas waving spears.