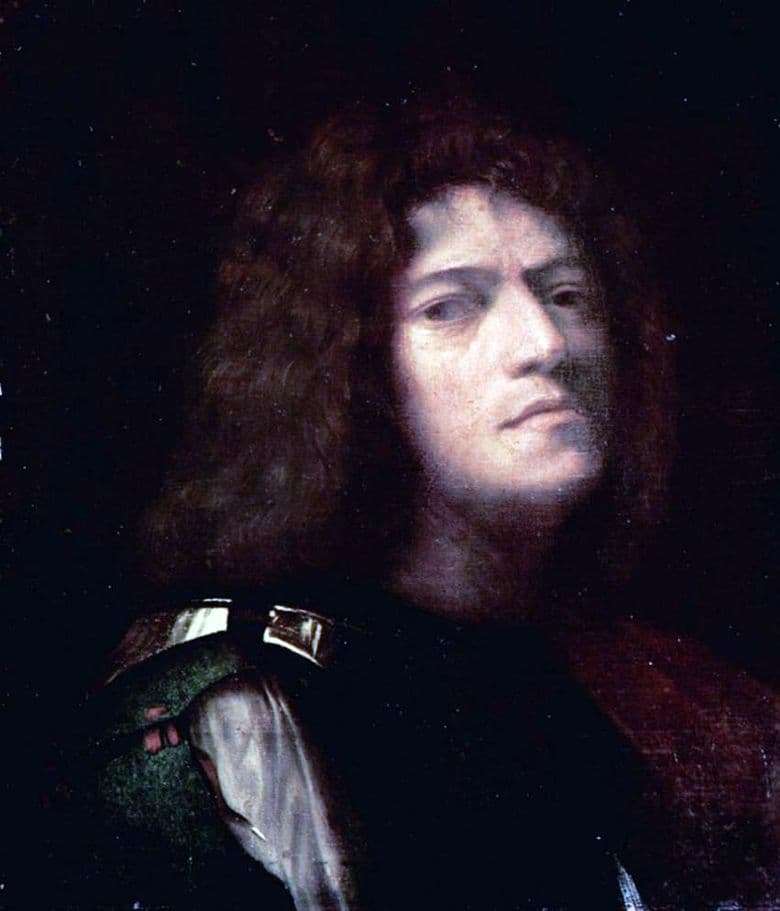 This work belongs to the late works of the famous Venetian artist. It is believed that she originally depicted the scene of the biblical confrontation between David and Goliath, but later the lower part of the picture with the giant warrior was cut out.

Giorgione is a progressive artist of his time. He rethought the concept of portrait and made his word in this genre. In front of us is a man with beautiful features and large, calm eyes. They express self-confidence and fascinate the viewer with special meaningfulness. It seems that a man knows some mystery of the viewer – so intriguingly he peers at the man in front of him. Thick, deep brown hair flowing on the shoulders shows the strength and youth of its owner.

Unusual and posture depicted men. Most often, portrait painters of the 16th century painted people in profile. Here we see a man in a half-turn. His neck is extended, and his chin is raised up towards the viewer. Such an arrangement of the body and head does not express a certain arrogance characteristic of many portraits of that time, but speaks of the naturalness and ease of a man. It seems that the hero of the picture was taken by surprise and sketched an unexpectedly caught moment.

All work is written in restrained muffled tones. But the dark background of the picture does not weaken the image of a person. Light falls on a man from above. Thanks to this, the viewer has an excellent opportunity to examine in detail all the facial features of the hero. And as if the occasional glittering of ornaments on his clothes set the dynamics and some intimacy of the picture.

Self-portrait shows the viewer how Giorgione saw himself. He wanted to convey his confidence, ardor, strength and at the same time interest in the mysteries of the human soul.