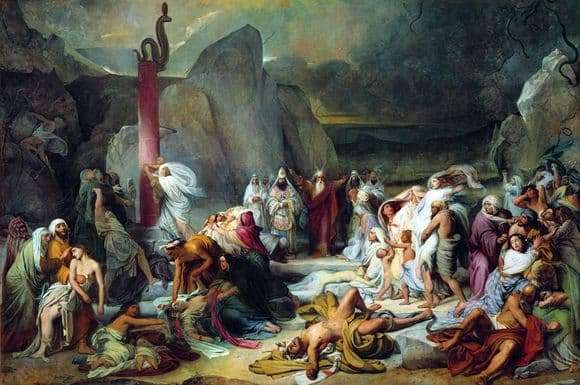 There is an episode in the Bible that seems rather cruel. After the Jews came out of the land of Egypt, they set out on a forty-year journey through the desert in search of the promised land.

After some time, people began to grumble – the lack of water, food, deprivation of the way made them doubt that slavery in Egypt was too bad. Then the angry Lord, unwilling to enter their position, sent rain of poisonous snakes to the earth.

As they fell, they stung the retreated Jews, and the people, perishing, prayed for forgiveness. Then Moses, listening to the command of God, made a serpent of brass and raised him on a high pillar. Anyone who looked at him with true faith was healed, and soon everyone was healed.

Bruni’s picture shows the culmination of this story. Snakes fall from the sky, scaring people. The prostrate body lies right in the foreground, children seek salvation from their parents, a young woman clings to her husband, hoping that he will be able to protect her. A girl is pressed against a column with a serpent, presses a child to the column, hoping in this way to rid him of the disease. Confusion, despair, fear reign on the canvas and through the frightened crowd comes the prophet of God, Moses, having raised his hands. Next to him, in priestly robes, Eleazar.

People cover their heads with cloaks, trying to help sting. The prophets, on the other hand, walk through them by reminding them that they themselves have chosen their destiny and fully deserve it.

However, for the viewer, they remain rather wrong. Children are not punished by killing them, and the Old Testament in the new time seems excessively cruel, a little creepy.

Terrible God punishes those who dared to doubt him, and the snakes fall from the sky, turn around, hitting the ground, and bring retribution and death to those who do not believe that behind the desert is a better life.