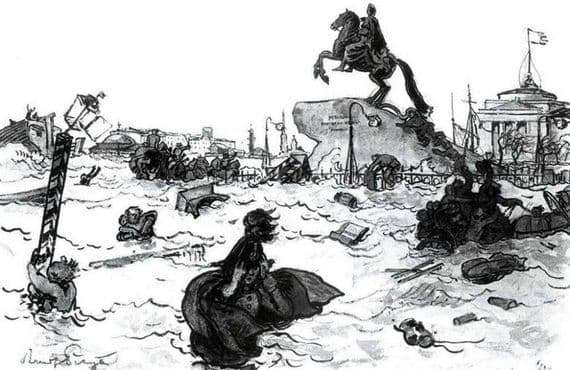 Artistic illustrations by Alexander Benois are today considered the best depiction of Pushkin’s works. Work on a series of works for the “Bronze Horseman” Benoit began in 1903, and in order to achieve such perfection he needed to spend 20 years. During this time, the artist drew a whole cycle of intros, endings, sketches and interpretations of the story.

Benoit performs his first 32 drawings in black ink and watercolors. Repeated modifications of the paintings the artist was engaged in 1905 and subsequent years. Amidst the entire ego of the cycle, there is the topic of persecution by a rider of a person, depicting the cruel force and power of a rider. Petersburg in his works does not look like himself. This is a gloomy little town, with small houses, fences and shopping areas. No amazing architectural works, palaces, nothing. Reflection of anxiety and excitement, which often covered the artist, turned into a horrible story of the fate of the Russian people.

The artist is constantly working on a series, complements his paintings with new and new elements. In his works he tried to depict the thoughts and experiences of a person on the threshold of the 20th century. It was their feature that made the illustrations very modern, striking every generation of art lovers. The whole series of illustrations was imbued with the special sense of style that Benoit had. He more than anyone else understood the era of the writer, as well as the basics of theatrical mastery, which enabled him to come up with such plausible scenes. His work was able to hold the bridge between the classical era of Pushkin and modernity, in which Benoit lived. His admirers were pleasantly impressed by the novelty of the paintings,