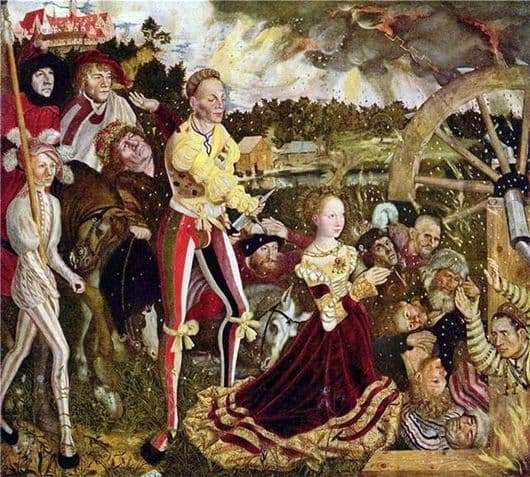 This picture is the central part of the triptych “The Martyrdom of St. Catherine”, made by Cranach in 1506 – when the artist had already worked for several months at the court of Friedrich the Wise.

The plot of the triptych refers to a famous Christian legend. At one time in Alexandria, the rule was Queen Catherine, who wanted to become a Christian. Her wish was fulfilled: she was baptized by one recluse. At the same time, the emperor Maxentius was in Alexandria, who sought to undermine the true faith of the woman. He sent fifty learned men to her, but they could not shake Catherine’s devotion to Christianity.

Moreover, these wise men themselves decided to become Christians, but the cruel emperor executed them one and all. Then Maxentius ordered Catherine to prepare a spiked wheel in which she would be tortured until she renounced the faith. But the plan did not come true: the lightning struck and

cut the hellish device into two parts… The angered emperor ordered Catherine to be beheaded.

As we see, the artist chose the most dramatic motive in this story: in a few moments the sword must destroy an innocent victim. Lukas amazingly accurately reproduces the characters of the legend. The first thing that draws attention is the spiritually pure Catherine, in whose eyes the fear of an imminent death cannot be noticed. From its image, Maxentius comes into contrast, whose cruelty and grim determination to carry out his plans to the end cannot but cause the viewer to shudder.

On the right and left parts of the triptych are depicted saints. One of them, Dorothea, is also associated with a curious legend that resembles the previous one in a plot. Before the execution of Dorothea, one of the lawyers decided to make fun of her and asked for a joke to bring paradise apples from the next world. When the saint was executed, an angel appeared at the scene of her murder with a basket of fruit in his hands (he also portrayed on a triptych), which made the audience believe.