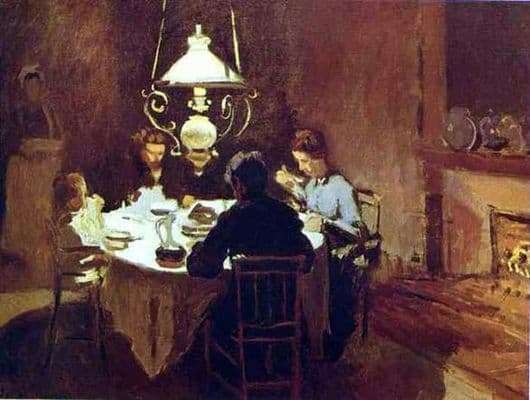 Claude Monet is a 19th century French impressionist artist whose paintings enjoy the well-deserved love of several generations of people who know the value of real art. The painting “Lunch” was written in 1869 in a manner peculiar to the artist to draw details, paying attention to absolutely every little thing, from the jug to the plates decorating the shelf above the fireplace.

The canvas that emerged from under the artist’s brush turned out to be quite peaceful and mundane, but no less beautiful and even original from this. The foreground of the picture is taken by a family having dinner at a round large table – a mother, a father, an adult son and a small child, it is unclear a boy, or a hedgehog girl.

The faces of the main characters are illuminated by a large beautiful lamp, the light of which, however, is not enough to illuminate the corners of a large room, because the face of a servant approaching with a plate of food remains invisible to the viewer. The family decorously and nobly dines, no one talks, everyone is terribly passionate about the process of absorbing food.

A hot fire burns in the fireplace, the glare of which casts a shadow on the people sitting at the table. The simplicity of this picture is striking, ordinary people, sit at a quite ordinary meal, after a long day.

Since the picture shows a maid, it can be assumed that the family has a certain wealth and weight in society, only the baby, who is comfortably seated in a highchair, behaves freely, while the rest adhere to the accepted rules of decency, which can not be overlooked when a woman gives a spoon to his mouth, like a man who is directly turned his back to the viewer.

In the picture, at first glance, there is nothing remarkable, but this is the whole point – to portray what everyone is accustomed to accept as ordinary in colors and put on display, what could be better.