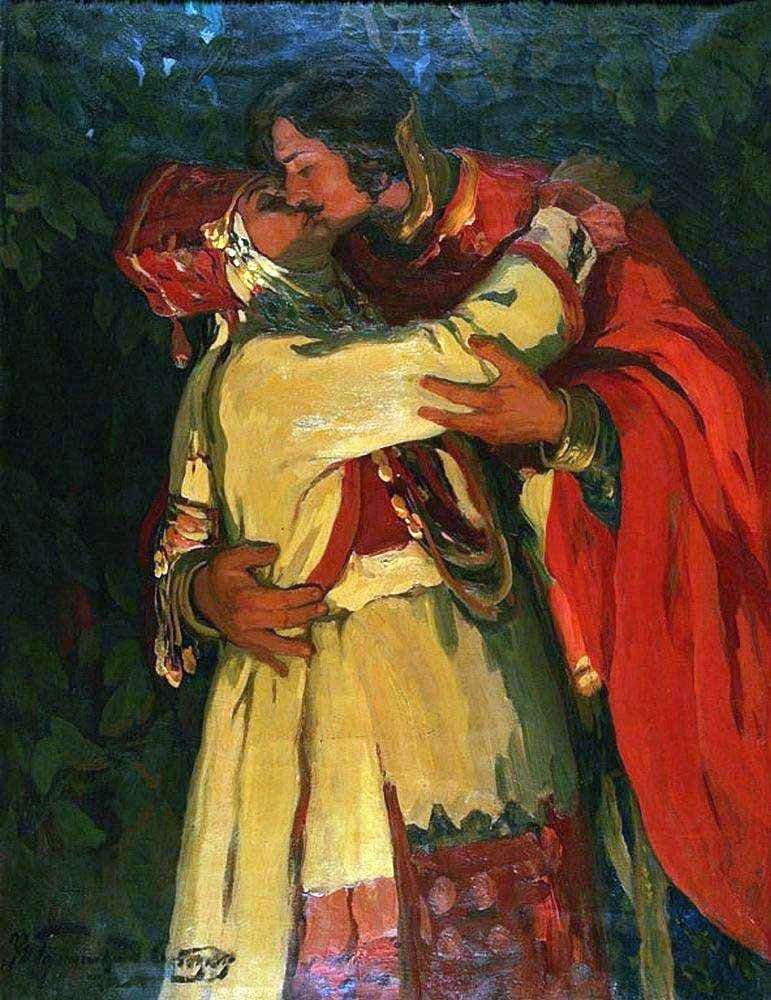 At the end of the nineteenth and first half of the twentieth century, in a period of significant changes in Russian cultural life, many artists sought inspiration for their work in the origins of the Russian people, referring to the motifs of ancient and medieval Russia. Those were Boris Kustodiev, the Vasnetsov brothers and a number of other prominent artists.

Among them was Ivan Silych Goryushkin-Sorokopudov (1873 – 1954), who gained fame at the beginning of the century as the author of a number of canvases dedicated to scenes from Russian history of 16-17 centuries. He also in 1908 – 1910. illustrations were made to the books “In the Forests” by P. I. Melnikov-Pechersky and “The Prince of Silver” by A. K. Tolstoy.

In the painting “Kiss”, written in the 1910s, the painter again turns to the historical theme. The image of a couple in love, merging in an ardent kiss against the backdrop of a dark green garden, is filled with bright and clean colors. Both poses and facial expressions of the characters glow with happiness and a strong faith in a good future.

In Kiss, Ivan Silych reflects the wealth and fullness of the soul of the people, the poetics embodied in the everyday and cultural traditions of Russian antiquity. The painting was highly appreciated by the contemporaries of the artist and took a worthy place in the collection of Russian painting; now it is kept in the Penza Art Gallery, in which the Goryushkin-Sorokopudov Memorial Museum was created.