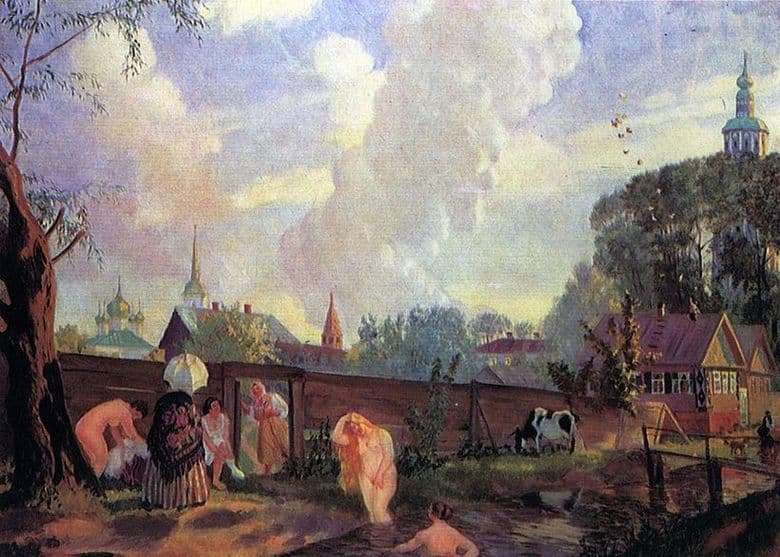 The painting “Bathers” by Boris Kustodiev, now kept in Minsk at the National Art Museum of the Republic of Belarus, was written in 1917. By this time, the artist suffered from an incurable disease – a tumor of the spinal cord – and from then until his death he was deprived of the opportunity to move independently without the help of a wheelchair.

Despite the serious illness, in the last 20 years of his life, the painter was immersed in work, creating a number of outstanding paintings; in fact, they represent a look into the recent past, in sharp contrast to the complex economic and social situation that has developed in post-revolutionary Russia that is engulfed in civil war.

In “Bathers” Kustodiyev creates a household sketch of peasant life. In the foreground a small river flows in which the artist depicts two naked young women: one of them has entered the water on the chest, the other is standing at the edge of the river, smoothing long hair. On the side, by the wooden fence, several women of different ages are resting, another one looks in the gate of the gate.

The painter repeatedly returned to the topic “Bathers” in subsequent years. The artistic feature of his work during this period is the depiction of healthy and full-bodied women, which is why he is often compared to the Flemish artist Rubens, who wrote in the same manner. Interestingly, Kustodiev himself was not a confident admirer of obese female figures, but saw in them only the traditional folk ideal of beauty, which he tried to convey in his paintings.