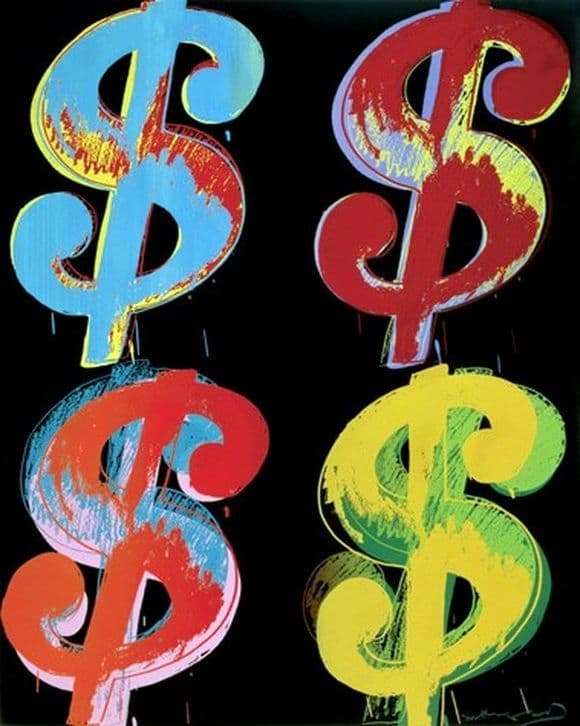 Evil tongues called Warhol an artisan of art, and in some ways it was even close to the truth. The fact is that Warhol was the closest thing to pop art. Combining in one photograph, design and painting, he received rather controversial works, whose artistic value seems to be devotees of the classics dubious.

“Dollars” is a whole series of his works, based on the copying technique invented by himself. The grid was impregnated with a photo emulsion and placed on it with a slide, after which the entire structure was illuminated. On the ground lit a frozen film was obtained.

Everything else was washed away and a stencil was obtained, with which it was possible to easily reproduce the same image over and over again. This is how portraits of Merlin Monroe and Elizabeth Taylor were created, and numerous opponents of this approach (formed simultaneously with its creation) expressed loud and rather evil criticism. They called this approach a craft, devoid of soul and individual approach, and therefore not worthy of the name of art.

Warhol ignored all such cries – he was paid a lot of money for his work, he was at a peculiar pinnacle of fame and he was absolutely indifferent to someone he didn’t like

“Dollars” lack deep symbolism and are multi-colored dollar signs on a black background. Blue-orange, yellow-green, they look flashy and provocative, as if offering to think about how much money means to people.

For everyone in the picture is hidden its meaning. Someone sees how the dollar gives the meaning of life – black, empty, when you are out of money – someone, on the contrary, thinks about how the world has rotted away, in which a piece of paper with a sign costs more than human life.

Both that, and that point of view have the right to existence. Plus the work of Warhol – in its polyvariance.