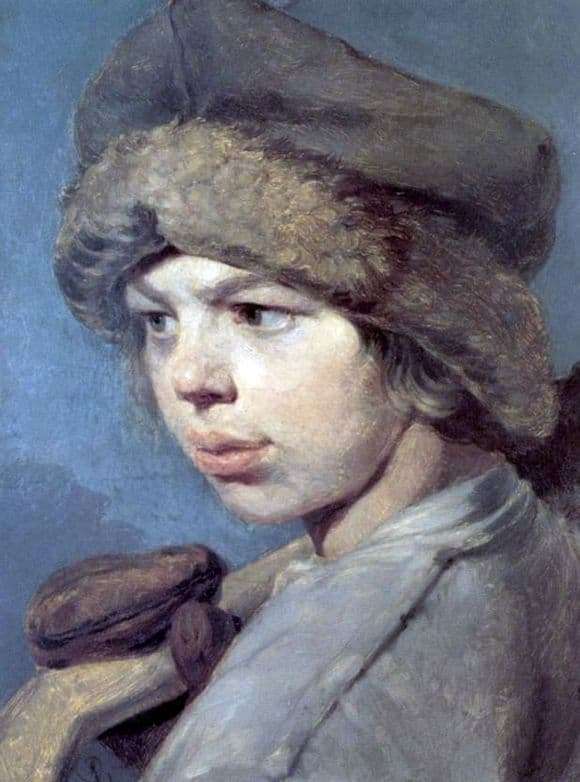 The painting was painted in 1825 and is currently in the State Tretyakov Gallery in Moscow. Materials for the creation of the work served as oil and cardboard.

The painting depicts a simple village boy, a peasant. This is not an invented image, the portrait was painted with a real child, whose father was a peasant Fedul Stepanov.

In the works of Venetsianov, the image of a simple country child arises not for the first time, the artist had a great interest in personalities leading a simple, working life. And, I must say, such “peasant” portraits managed to Alexey Gavrilovich just fine.

The artist attached great importance to life to labor, believed that it was in him that the beginning of all beginnings lay, that the world rested on simple workers. Despite the age of the boy from the picture, we see that he already has some experience that turns the features of his face from childishly soft and naive to masculine, harsh.

eyebrows and tightly compressed lips, a concentrated look, a turn of the head create a sense of purpose, confidence, and strength. The boy understands that his life will depend only on himself and firmly squeezes the tool shaft on his shoulder. Everything in the guise of a boy says that he is ready to work, and, unfortunately, he may not have had a childhood, as he worked from an early age.

An attentive viewer will notice that the winter hat is a little too big for the boy, as are mittens. This may indicate that clothing in a poor family is passed on from generation to generation.

Venetsianov does not attach importance to the surrounding environment, leaves the background unworked, which makes us look at the face and look closely at the image of the boy. How exactly the emotion is captured, how masterfully captured the moment! Such people in life are not considered, no one looked at the faces of ordinary peasants. And Venetsianov peered, and now we are doing this together with him.