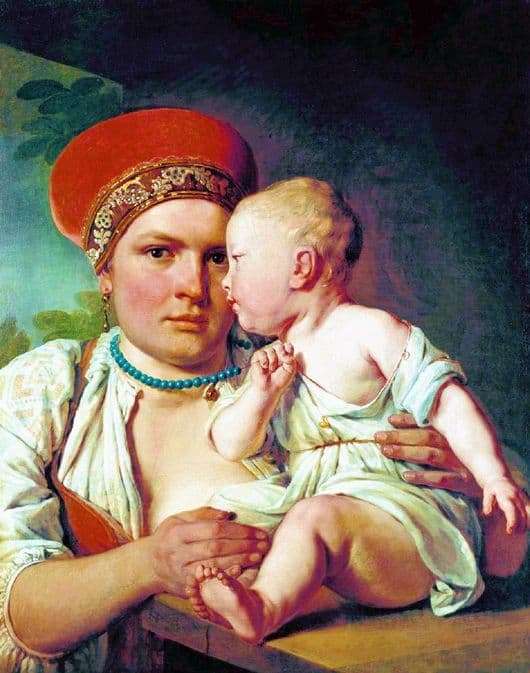 Venetsianov is a recognized portrait painter who loved and painted pictures in the everyday genre. He studied the art of creation not only in the academic direction, where it was proposed only to copy finished works and to copy from already known models, but to develop on real objects. In the later years of his life, the artist founded a school that realized his ideals.

Pictures should be natural and realistic, capture an instant in natural beauty.

No wonder that the plot of the presented image was chosen – the wet nurse with the child. It is worth noting that the role of such nannies was huge in Russia. Each high-ranking family had to keep and have with them a nurse who would feed and leave the child. It was very difficult to get to such a “bread” post. Only a healthy, strong and experienced woman could become a nanny for the heir of the nobles and the state. Be sure to Russian and Christian. It was imperative that the woman should ask permission from the father, who assessed her moral purity.

The picture depicts the ideal of the Russian nurse from a noble family. Well-groomed hands and face, says that she has not done hard work for a long time. Experienced hands correctly hold the child, allowing him to move as he wants, but at the same time, without encountering small restrictions. The woman herself in the body, which speaks of her good health and milk availability. The baby is already reaching for the breast of the nanny.

The child already seems old enough to stop drinking milk. But according to tradition, he will have to eat another year, as it enhances immunity and contributes to the health of the baby. The nurse is sitting in a traditional Russian dress and with beads, which means that the owners are self-satisfied. Not the usual detail – beads, which at first glance seem to be superfluous, play an unusual role for the nurse – distracting the baby so that the woman has time to position the child properly without shouting and fighting.