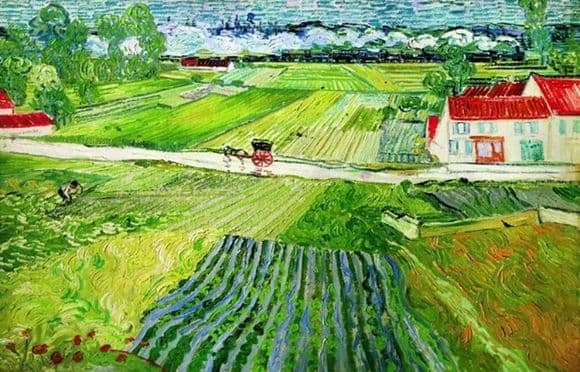 The canvas is one of the last works of the great master. He wrote a picture a few months before his death in the small town of Auvers-sur-Oise, where he spent the last year of his life. It is one of the landscapes of this town that was captured by the artist on the canvas. Because of the image in the picture, she has another name “Landscape with a wagon and train”.

In the center of the picture, this is the very cart. Its size is insignificant, but it attracts attention with its wheel. The artist painted it red-orange, making the color as bright as possible. The choice of color allowed to attract the viewer’s attention and at the same time reveals the symbolism of the image. If we consider the wheel as an allegory of a person’s life, the bright color indicates its saturation with events and people. The life of the artist, too, can rightly be considered bright. Another symbol is the sun. A burning and bright circle that runs its way across the sky from dawn to dusk. The whole picture is full of life, ranging from the symbolic bright wheel and colorful fields around.

Van Gogh, anticipating his immediate death, continues to love life and wants to show the beauty of the world around him to the viewer. Its fields are full of colors: lush green grass, pink flowers of alfalfa, purple-black earth, dark green young shoots of plants and yellowish shades of mature grass. Among the riot of colors, the figure of a reaper becomes a loud chord of vitality, he is depicted at work. Bent, from which it seems even less, it does not become invisible. He is also the embodiment of life in this picture. In the background, the color of the picture is transmitted by the yellow fields of wheat and bluish hills, among which the train moves in an invisible distance. Behind him remains a long and thick white trail of smoke,