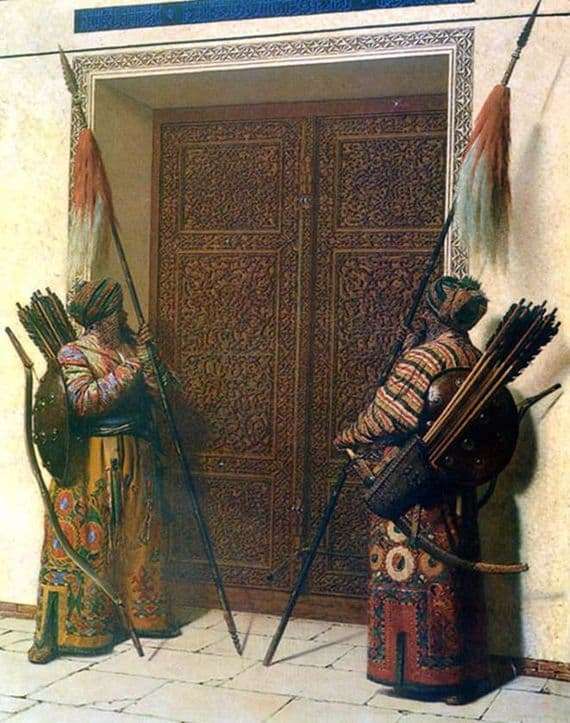 The picture is painted in oil on canvas in 1873.

Vasily Vereshchagin is an artist who wrote many canvases on the theme of the East, which made him very popular among artists.

His paintings help us to return to that difficult time. Exquisite clothes, heavy and durable doors, arms in the form of arrows and a bow make it possible to know a little how the people of the East lived hundreds of years ago.

The paintings of Vereshchagin always amazed not only ordinary people, but also famous artists, because he, like no one else, could prescribe the details, the mentality, the history of events.

Tamerlane is a great conqueror, who by his actions was similar to Genghis Khan, but differed from him even more bloodthirsty, and significant mind. Timur knew more than one language, loved to communicate with the elders, he knew the Quran completely. His conquests were huge, he made the city of Samarkand his capital. As written in the ancient books, he cursed those who disturbed his peace. On his tomb it was written that whoever opens it will be in for a bloody war.

In 1941, the prophecy came true for our country. The day before the start of the Second World War on June 21, the tomb was opened by our scientists. After the decision was made to seal the chambers of Tamerlane in 1942, the turning point for our country came. Russia began to win the battle and won the war.

These events greatly influenced Vereshchagin, he devoted his picture to this topic. And the canvas he managed like no other. How skillfully he conveyed the decoration of the carvings of the doors of past centuries, as if he had painted clothes. By their volume, it is clear how heavy it was to wear it all under the scorching sun of the East.

All colors are selected by the artist very accurately. After all, the eastern countries have always been distinguished by their color. The guards on the canvas peered into these luxurious heavy doors, waiting for their great master. Centuries later, we can remember the events of those days, learn history, think about life.

The picture is in storage in the Tretyakov Gallery. Moscow.