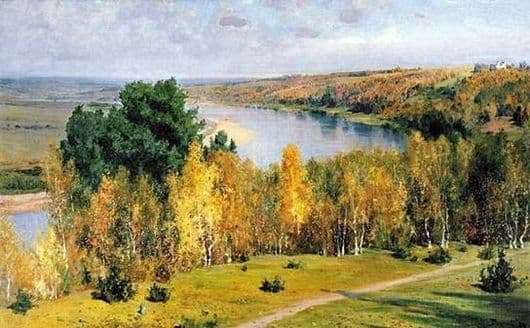 Along with Repin, he received the gold medal of the Academy of Fine Arts, the teacher of Levitan and Ostroukhov and lived to be recognized as “People’s Artist of the RSFSR”, Vasily Polenov, among a number of works that brought him worldwide fame (they made him a member and French Academy) and wrote a relatively little-known landscape “Golden Autumn”.

Written not far from Polenov’s own estate on the Oka, the picture shows where the joy of golden autumn came from his students, Ostroukhov and Levitan later. On a clear sunny day, the monastery on the hill at the bend of the river shines in the sunlight, like a glacier on the Alps (Polenov had only recently returned home, before crossing the same Alps several times a year – from Italy – to France through Switzerland) , but it does not attract our attention immediately. But, when you notice him, you won’t take your eyes off. And at first the attention is drawn to the majestic bend of the river, the living blue ribbon on the golden field of autumn, the hazy, bluish haze of the hills between which the river disappears.

Then only, having carefully examined the foreground of the landscape, you note that autumn somehow – just managed to run into this corner: she too carelessly painted the trees with yellow splashes of red. And the green giant before my eyes is a reminder of summer. But in this picture it is not even the bright yellow color of the trees that is striking, not the neat path above the river, but the river itself. Look at how clean it is, how, glaring under the rays, reflects the sun and sky, as if on the blue shallows the scorching foliage gathers and as in the dark blue coastal pools on the right bank the trees from the “forest” shore are clearly visible.

Polenov traveled throughout Europe, was in Egypt, and in Asia.. but was not in the USA, where the expression “Indian Summer” came from. Otherwise, the picture could be called so. Or “Indian Summer.” Because, although the picture is autumn, but it is still permeated with summer heat and light. But, most likely, in the case of Polenov, it was so heartfelt, even with the help of not the brightest colors, which showed the beauty of Russian nature, it would be possible to call the picture “Motherland” ..