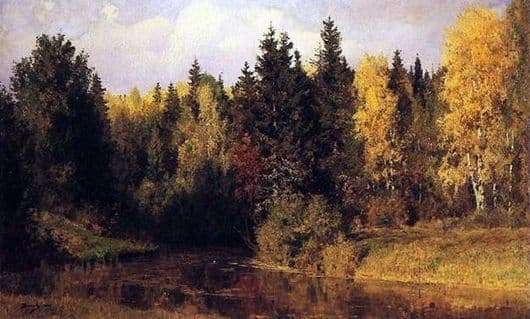 V. D. Polenov is known as one of the best Russian landscape painters. He was one of the first who began to paint landscapes in the open air – what is today called open-air. His works in this genre are similar to poetic works, glorifying the beauty of the native and so beloved Polenov nature.

The painting “Autumn in Abramtsevo”, painted in oils on a large canvas, became one of the first Polenov masterpieces in the spirit of a large-style landscape, as well as the so-called. “Clean” landscape, i. e. devoid of any domestic details, which was characteristic of the earlier period of the artist.

“Autumn in Abramtsevo” depicts Polenov’s favorite season, to which he dedicated a whole series of his creations. In this picture, the artist showed us the Vori backwater – a small river in the Moscow region, which flows between a dense forest. This is a reserved corner of pristine and beautiful Russian nature. The forest froze before us in a stately impenetrable wall. Yellowed birch and aspen trees report that autumn, the very time that miraculously transforms the modest nature of this land, has already come into its own.

However, after looking closely, one can notice some reflections of summer, which have not yet faded its colors, which, together with a fine sunny day, creates a particularly joyful and even festive mood when looking at this picture. At the same time, this creation of Polenov also disposes to deep thoughts, it breathes harmony and peace from him. On this canvas, in a combination of deaf woods and voiced colors of autumn, pacification and glee, Polenov is not the first time in his work skillfully displays such opposing moods. In addition to birches in the picture you can see and eat, with their fluffy paws as if rushing into the sky.

The dark, cool waters of the river, in which the trees are reflected, seem to have stopped for a moment their run, to let us enjoy silence and silence. On the bank of the river there is a magnificent and soft yellow-green carpet. The whole picture is filled with admiring worship of Polenov before the beauty of Russian nature. The image of her on this canvas is addressed to the viewer, it is expanded and wide, like the very soul of a Russian person.