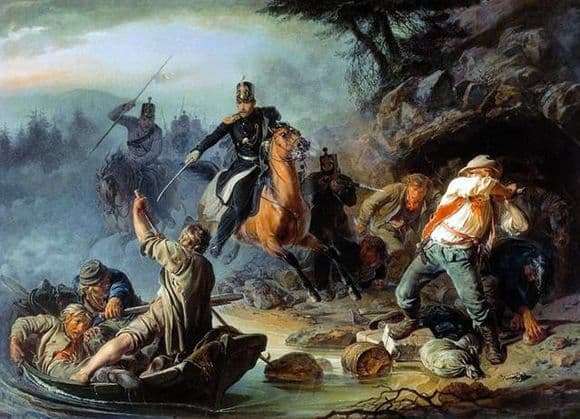 The work “An Encounter with Finnish Smugglers” by Vasily Khudyakov is of interest, first of all, because along with the painting “The Temptation” by artist Nikolai Gustavovich Schilder, it laid the foundation for the famous Tretyakov Gallery. May 10, 1856 – the day of the acquisition of these works by Pavel Mikhailovich Tretyakov is considered the date of foundation of the gallery.

“The Clash with Finnish Smugglers” was written in 1853. Khudyakov specialized in historical and portrait painting. The images of the master were not rich in emotionally strong and interesting plots, but this was filled with an amazing play of light, with the relief of scenes and images captured on the canvas.

The picture captures the moment of the collision of peasants, trades in illegal trade, and the group of border guards. Many of the Finnish residents were engaged in transporting various goods, selling them from hands in Vyborg. People have avoided paying proper duties and taxes for years.

With the help of a well-designed composition the outcome of the battle is predetermined. The doom of a group of smugglers is reflected in their mixed and fussy gestures. The remaining people on the shore flee in horror, trampling scattered objects of illegal cargo. Those who managed to get into boats are trying to hide, furiously pushing and fighting for a place in the boat.

A horseman rushing ashore, flying and elevated above the others, is located diagonally, from top to bottom, underlined in bright contrasting colors. The vivid colors of his figure are also given by unclear, hidden by haze, images of other soldiers, by a dense, gloomy mass approaching the crime scene.

This artistic decision enhances the effect of surprise seizure and the futility of the resistance of smugglers. The blurry landscape in the background illuminates the first predawn rays, letting you feel the failure of the opened scam.