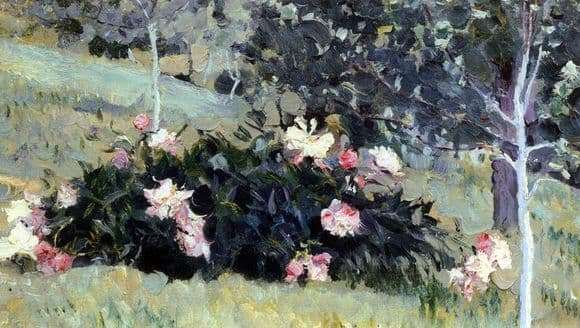 Nesterov, a Russian peredvizhnik, one of those who, in anticipation of the displeasure that was brewing in the country and its resolution (both the thunderstorm is resolved by thunder and the people’s anger must be reborn into a revolution), wrote cautionary, full of hidden meaning of the picture.

They showed the lives of ordinary people, their sorrows and troubles. As if wanting to sober up the powers that have gone too far with the art, the artists almost shouted, but their exhibitions were not a success and they were never inspired by anyone.

Nesterov is a master of historical portrait, in his paintings showing the past of the people, valuable, despite the obvious contempt for him from those who considered themselves to be enlightened and educated people.

“Peonies” are atypical for him, because they have no appeal, no understanding, no sorrow – they seem to be resting between serious, hard work, paying attention to the ordinary, everyday life of the earth. A bush of peonies blooms brightly on a hillock.

A thin birch swaying from the breeze above it, others in the distance a little thicker, but also hardly more thick than an adult man’s hand. The usual summer day of Russian nature, devoid of people.

Flowers shake with buds, small insects swirl above them, the wind plays in a birch grove, and a hot afternoon reigns over the world, languid and quiet. As if by force distracting himself from the human struggle and human destinies, the artist depicts the most simple landscape. Reminds himself and the viewer – yes, people are and people are bad. But no matter how hard it was, no matter how twisted their destinies, peonies continue to bloom and the sun continues to rise and set.

Sometimes, whatever the bloody struggle, whatever the brilliant ideals, you need to get so distracted and look for a moment around you. Exhale Inhale And move forward again.