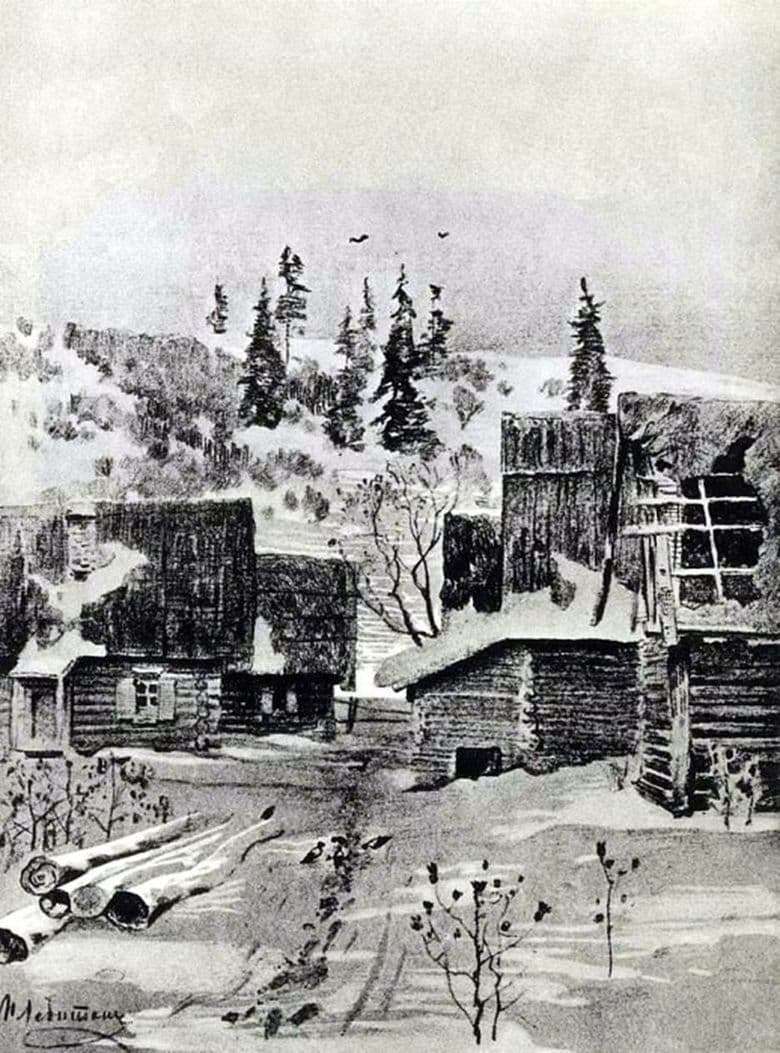 The figure shows a view of the neighborhood of Zvenigorod, the sketches for which the artist made when he was in Savvinskaya settlement. The lithograph was published in the journal “Russia”, illustrating an article about Zvenigorod, but it was published with the author’s signature as an independent work.

Three-dimensionality of impression, the heterogeneity of the log walls of houses and trees, the play of sunlight and shade are delicately conveyed on the print. Even the modest resources of color printing applications give rise to a feeling of richness and color. This drawing of the young master refers us to the last years of the artist’s life, when he became interested in the plot with the image of huts.

On lithography, the author with sensitive sincerity and poetic showed the outskirts of the village with its log houses, one of which has a half-destroyed roof. Immediately after the huts there is a gentle hill with spruces growing on it and rare shrubs. On the snow that has covered everything around, a rectangle appears translucent through the earth’s snow cover, probably a vegetable garden or a piece of a cultivated field. Near the house on the right plane of the picture, quaint bare bushes with several dry leaves preserved on them, touchingly emphasizing their winter condition, have been carefully written out.

All little things are worked out in detail – from logs prepared for the repair of a leaky roof of the hut, to birds trying to find food on the road, and human footprints on it. The snow is not lying too tight on everything, he barely dusting the roofs, trees, road. The artist in this picture thoroughly reproduces all the nuances and details.

The task of reliably fixing the appearance and texture of reality is subject to all the techniques of drawing, built mainly on the outlines and the reconstruction of light and shade through the pressure on a graphite pencil. The drawing was made in a characteristic for that time manner, based on the cut-off design of the image, when the same linear shading technique is used to depict not only objects, but also shading. The tonality of the moments of this pattern is also distinguished by the fact that during lithography it is given a colored texture with intervals. The figure shows that the young artist is well versed in the visual plans and is able to build them on the basis of tones.