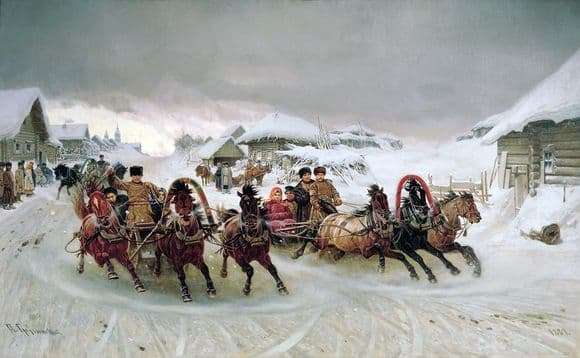 Peter the Georgian, who is known for his battle paintings, wrote and genre scenes. In particular, Georgian began to actively write genre canvases on his return home. One of the genre scenes captured in the film “Maslenitsa” in 1889. This canvas is one of the most famous works of the Russian artist.

The painting “Maslenitsa” contains horses that are harnessed to a sleigh. They quickly jump on one of the village streets covered with snow. On the heads of animals – bells, the sounds of which are presented when looking at the canvas.

The sleds are not empty: both young and old people are accommodated in them. Everyone looks happy and defiant. And how else, when on the street is a national holiday – Maslenitsa, which symbolizes the farewell of winter and is regularly celebrated at the end of February. The traditional celebration of Shrovetide includes eating pancakes with butter, visiting, riding from the hills, as well as riding a troika, captured by Gruzinsky. In general, the ceremonial component of the holiday combines folk and ancient elements of the celebration. And despite the tightness of the sky, the picture fully reflects the solemnity and festivity of the moment.

In addition to sitting people in a sleigh, there are other characters in the picture. These are residents of houses who came out to watch for the fun of the villagers passing by.

The artist managed to capture the movement of horses: their manes and tails fluttering in the wind, and the snow rises under the hooves of animals. When you look at the canvas, you immediately feel the whistle of the wind from the speed of driving.