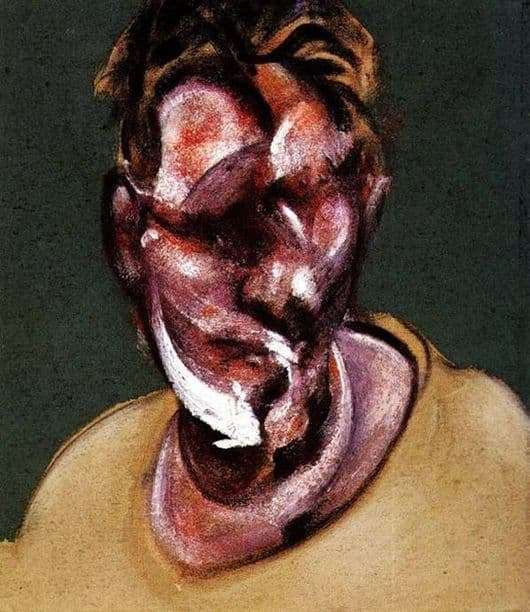 The canvas is made in the spirit of expressionism, which is manifested in a certain sculptural component of the portrait, a break in the forms, a mixture of colors and their spreading over the picture. A certain deformation inherent in all the paintings of Bacon, which makes them natural and quite accessible to understanding, is associated with such fluidity.

Lucien Freud is one of the best specialists in the field of figurative art of painting, Bacon met him in 1945 and became friends very quickly. Artists painted portraits of each other more than once, but the portrait painted by Bacon is the most successful from the point of view of contemporary art, but less understandable for an ordinary person who is not used to expressionism that is agressive.

The canvas really depicts the silhouette and common features of a human neck, shoulders and head, but instead of a face, the audience is presented with a set of oblique lines, strokes and drips, among which only a very close connoisseur of this trend in art can see the nose, eyes, eyebrows and mouth of a person. But the common features inherent in Freud could hardly be found in this portrait by himself.

The face of the person is painted in a mixture of pink and dark red colors, only the hair and the collar of the shirt remain normal in terms of the usual portrait. The portrait was written on a dark background, Freud had nothing behind him except for a gaping black void, but nevertheless he liked the portrait very much and was received with great enthusiasm, which very quickly passed – in the mid-70s friends argued about the manner of painting pictures and more failed to establish relations, and only this portrait became the only witness of the friendship that binds them.