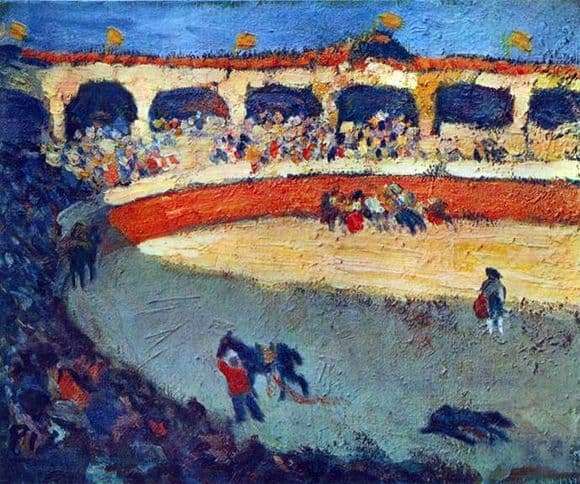 Corrida has always been the passion of the famous artist Pablo Picasso. Actions dedicated to these battles are displayed on many canvases of the author. But the most famous is precisely the “Corrida”. The picture, like many others, was painted with rich sweeping strokes. Attention is immediately attracted by the contrasting combination of delicate sand and bright scarlet color. People in the stands are depicted with large, variegated strokes. Although, if you look closely, it can be noted that not so many shades are used: the same sand, scarlet and rich blue.

The picture is as if divided into two parts by the reflection of the shadow. On the sunny part of the picture is still ongoing bullfighting. A bull and a flap of red cloth are clearly seen, and people are depicted in blurry blue-brown colors. On the dark side, the action is almost suspended, in the center lies a wounded bull, each of the people is already distracted from the process and is busy with his own affairs. Only one of them watches the actions in the other side.

The spectators in the shaded half are painted in dark colors, only in some places large red fiery strokes are clearly visible. Sure strokes accurately convey the texture of the sandy surface, on which all the main actions take place. Despite this apparent symbolic separation of the canvas, it seems incredibly sunny. And the use of a small number of shades in no way reduces its brightness and saturation.