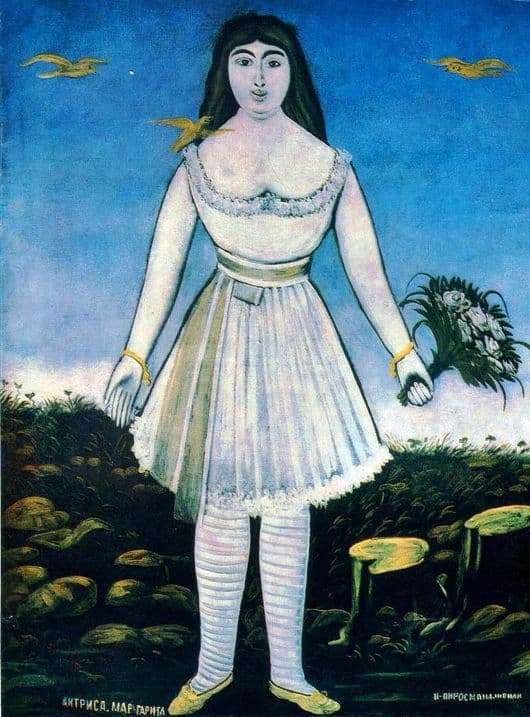 Niko Pirosmani died in poverty, but left behind a lot of paintings, which today are in museums. His most valuable work is the painting Margarita, which he painted in 1909 and presented to his beloved. In the picture, the author showed a special world of harmony and mutual understanding, which he lacked so much in life.

The picture is made in cold colors. Looking at the image, one involuntarily gives the impression of lightness, weightlessness. The canvas is made in the characteristic manner of the author, which later became known as primitivism.

A strong feeling led Pirosmani to paint a picture for his beloved. For the first time, Pirosmani met with a woman who won his heart and at the same time made him suffer. The artist could not win Margaret. According to the author, hardly anyone, in general, was able to reach the cold heart of the actress. She came to Tiflis with a roving theater. There Margarita shone on the stage until she had to leave. It was in her beauty something repulsive, formidable, incomprehensible to the human eye, it could only be felt.

Margarita was the embodiment of a mature oriental beauty. She dressed well and watched her appearance. This is what Pirosmani imprinted on her. On the canvas, Margarita radiates some unusual glow, as if her beauty is needed by all mankind, and not just by it. The girl’s figure contrasts sharply with the blue sky. Bright saturated color enlivens the whole picture.

Cloth “Margarita” was an example of a particular view of the artist on the surrounding reality.