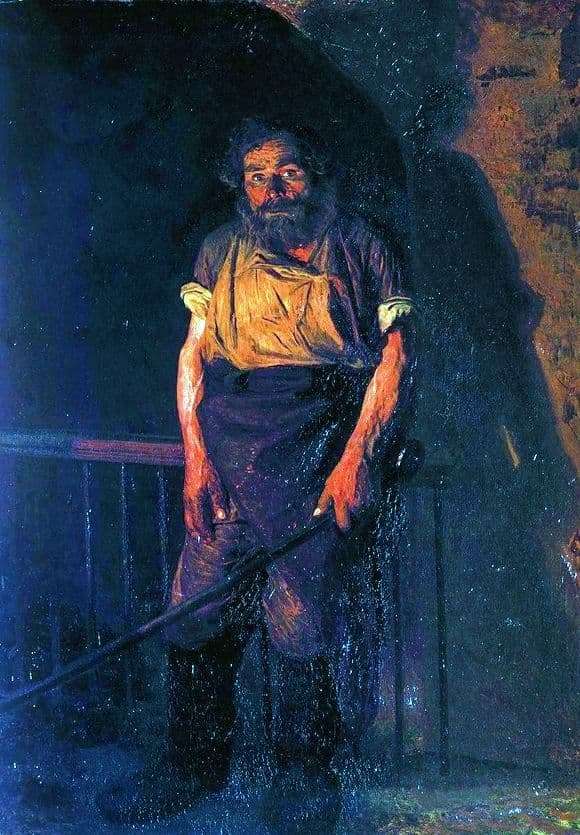 “Fireman” Yaroshenko was one of the first pictures, telling about the difficult fate of the Russian people. She, along with others devoted to the same topic, created the image of a proletarian, a worker who does not get pleasure from work that works like cattle in cattle conditions, and which no one ever remembers when she thinks about a hot bath or that it’s time to bathe the baby.

The furnace in the picture is not visible, but its presence is felt very close. Red flames of flame play on the figure of a man, on an uneven brick wall, recalling the hellish torment and sinners who will be plunged into hell fire. However, the stoker is not a sinner. If you use this terminology, he is more like a devil who rules in the hellish heat of the boiler room. But this image is not accurate – the devils should enjoy work.

Something made the stoker stop. He stands, having shifted the poker from his right hand

to his left, in a relaxed posture, showing great fatigue and trying at least a little rest. He is wearing coarse clothes stained with coal, his hands are twined with veins and are bulging with burns. In the palm of the black, it seems, ingrained in such a way that it is no longer wash. The stoker’s beard is combed, the face is also bumpy, there are scars on it. He looks at the viewer not accusingly and without much interest, rather with bewilderment.

Something this bewilderment is akin to the confusion of a cow, which leads to the butcher. But in his face there is not even a fleeting pleasure from a respite, only transcendental fatigue. At such work can not be happy. When you plow like an ox, you can’t be happy. Behind the fireman’s family – she’s not in the picture, she is guessed at – and a difficult life full of hard work.

One of the artists who saw this picture, said very precisely: “All my life I didn’t know that I owed it to someone.