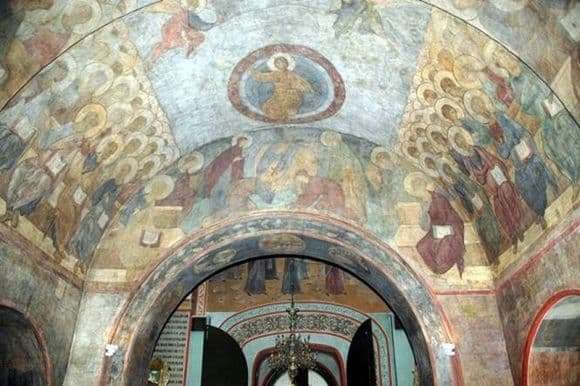 Rublev is one of the most famous icon painters, whose manner of writing for many years determined the entire development of Russian icon painting. After him, the familiar, gracious, well-defined faces of a dark, almost brown color, certain poses, a certain symbolism became familiar. And, despite this contribution, that after 600 years, its icons are remembered and preserved, very little is known about Rublev’s personality – only what can be said by looking at his works.

However, it is reliably known that in 1408 he went to Vladimir to paint the Cathedral of the Assumption of the Virgin Mary there. The theme he was given was exciting in one way or another by all artists who were not alien to religious themes – the Last Judgment.

In the European tradition, his image usually recalls bonfires of the Inquisition. Sinners on one side, the righteous on the other, a severe punishing god, ready to throw them into hellish torment, into a scorching fire and the general feeling of oppressive fear, frightening forebodings of the future. Their purpose is through fear of forcing a person to obey.

Ruble chose a different path – there is no separation between his goat-footstecks ​​and lambs on his fresco, everyone stands in the radiance of the Lord who has appeared, and this is not a terrible event that should cause horror and a desire to urgently repent, but pure delight of meeting someone who is love.

Mercy, which is so often forgotten. The joy of being with God, the happiness of the very existence of God, the submission of love, and not out of fear of punishment – this is what Rublev expressed in his frescoes. Not the pipes of Armageddon, which make us tremble and wish to hide as far as possible, but fanfare, announcing that the One is coming Who has the right to judge and who always judges mercifully.

Do not weep, but rejoice, for this is not the end of earthly life, but the beginning of eternal life.

Despite the biography of the nebula, one thing is for sure: Rublev knew what charity is.