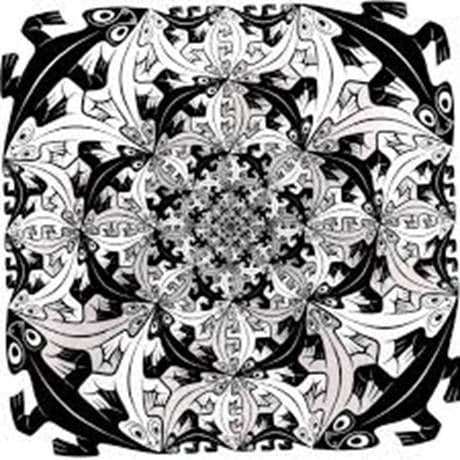 Maurits Escher was an outstanding Austrian artist working in graphic engineering. His engravings, mosaics and lithographs reveal not only artistic genres, but also philosophical categories, such as infinity, absolute symmetry, the golden ratio, and, of course, mathematical concepts.

In his work he masterfully combined geometry and art, for which he was named the most extraordinary graphic artist of the twentieth century.

Escher was very actively interested in various aspects of mathematics and art and created his paintings based on the mathematical idea, theorems and concepts. So, using the mathematical proof of filling the plane with three main polygons, he creates a graphic image of “Mosaic”, which becomes the object of much research.

Triangles, squares and hexagons are used in the picture, and this creates a unique, symmetrical graphic image, black and white lizards, which fill the entire space of the picture.

The artist was interested in the categories of regular mosaics, and irregular (that is, those created using non-repeating elements), which is why his paintings are of such great scientific interest. Maurits Escher is an outstanding representative of imp-art – a combination of mathematics and painting, graphics.