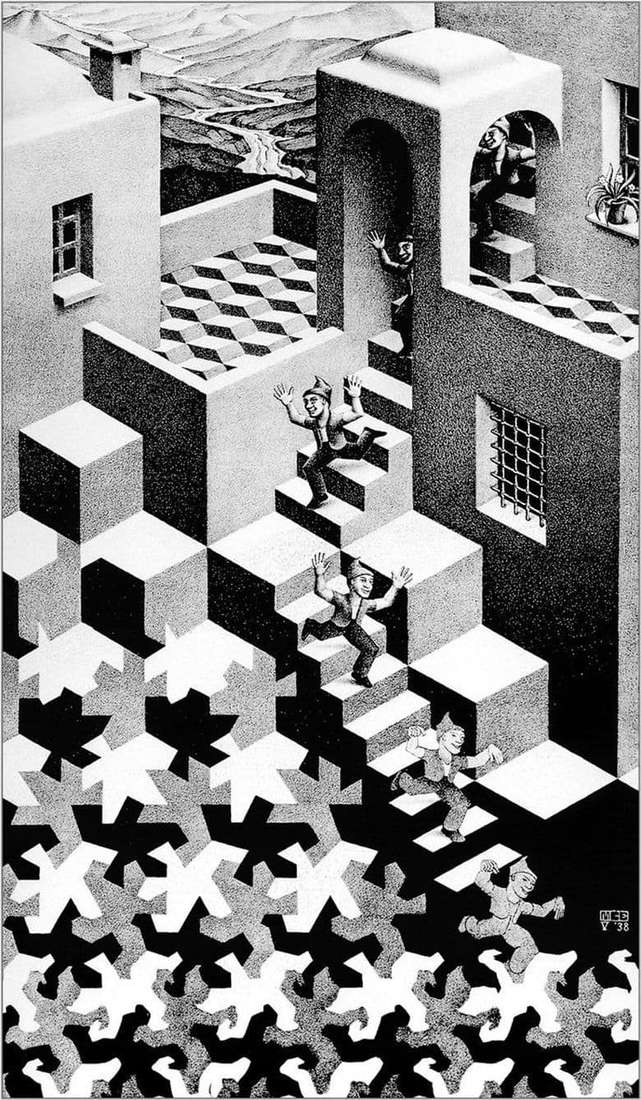 This work of the famous Dutch graphic artist, known for his complex conceptual engravings and lithographs, in many ways closely intertwined with mathematics, geometry and the desire to embody the impossible reality. He deliberately chose the path of the engraver, rather than an oil painter, due to his interest in the ability to accurately copy images.

In order to create a lithograph, on a smoothly polished lithographic stone a thick layer is drawn (with a special pencil or brush) and etched with weak nitric acid, as a result, under the press, the ink does not stick to the previously filled spots and the desired pattern is printed on the paper. You can create copies many times, and in extreme cases, clear the stone and apply another image. This technique is much easier and cheaper than making engravings, so it gained great popularity.

In the upper part of the picture from the arched opening a little man appears, happily running down the stairs, not knowing that soon he will have to dissolve and disappear, first in the mass of his faceless brethren, and then in the angular geometric field. It will gradually begin to assemble into cubes, which will turn into the tile floor of the tower, and, hiding from sight, will again become a new gnome, rushing along the steps. The cycle closes. It is very symbolic that the river flowing along the hillsides in the background is shaped and twisted to echo the stairs. And in general, it can be assumed that it implies not only the cyclical nature of insignificant human lives, but also more global processes, for example, the circulation of water or seasons in nature.

Closer to the bottom corner on the black part of the picture, the author’s signature is clearly visible – the English letters of the initials “MCE”, V – May, the fifth month and two figures indicating the year of creation.