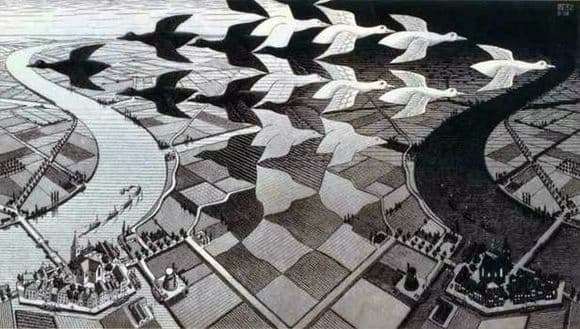 M. Esher is an outstanding schedule. His works are individual and filled with scientific meaning.

The artist with the help of painting depicted various scientific theories, sometimes of dubious nature. He pulled the universe apart and drew his associations. His work is often compared with the work of Dali.

It is not always easy to understand such pictures, it is sometimes difficult to grasp the main idea of ​​the work, but everyone can find something personal in such works and these canvases can be viewed endlessly.

The painting “Day and Night” is one of the most famous works of the artist. The image is made in such a way that it seems volumetric. There is a movement, apparently the artist managed to display the movement of the universe. This work reflects the flow of one into another, such a reincarnation. For his time, the artist made a revolution in art.

Modern technologies allow you to display the idea in different degrees of freedom, but this technique today is striking in its originality. The combination of black and white reflects two opposites. One flock of birds flows into another, geometric shapes do not allow to define clear boundaries of the image. This work is a kind of visual deception.

Black color is surprisingly converted to white and vice versa. It is like life deeds and thoughts. They change, the meaning of the event may change significantly over time. This artistic masterpiece is a graphic depiction of Einstein’s theory of relativity in its purest form.