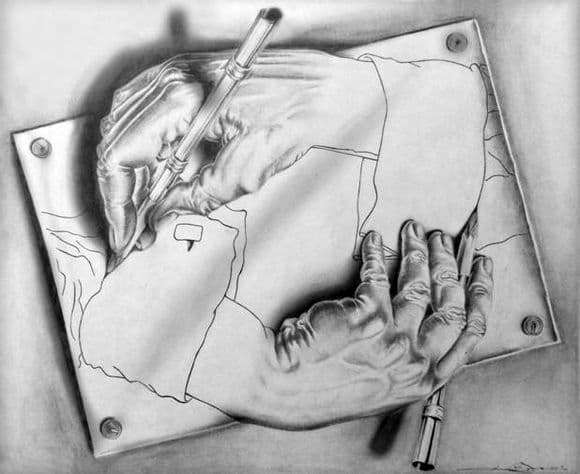 The sheet is held tightly on the push pins. One hand sketches the cuff with an elegant cufflink. And – as if suddenly – a second hand is selected from this painted cuff, which is not even completed yet.

Moreover, getting out of the painted surface, it becomes like a living creature. And this creature also draws a cuff, but without a cuff link, from which a “live” hand also protrudes. “Hands draw each other.” Mutual closure, the semblance of a loop, self-reproduction – this is all a given picture in which (as in many others, if not all) hid the secret of human consciousness, human superiority over nature and technology.

There is a version that the artist himself inspired this idea by Leonardo da Vinci, who has in his artistic arsenal a sketch for “The Portrait of Gineurora de Benchi”.

This and many other lithographs and was famous artist Maurice Escher, who led the whole Netherlands into a frenzy with his new, unusual and original at the time, graphics.

Escher’s works are truly amazing. Infinity, three-dimensional intricate shapes and objects, the existence of which is impossible according to the laws of physics, symmetry – all this is Dutchman Maurice. The latter very subtly learned logic and plasticity, as well as their paradox and contradictions. Coupled with the virtuosity of the performance, the works were awesome. If we take into account that the graph had practically no knowledge in the field of exact sciences, you are amazed and impressed even more by understanding how accurately he caught on mathematical research.

The artist did not draw, he “played”, played with figures, objects, animals, hands, people, patterns… But – My God! – how masterful! It is truly amazing how a simple harmless game can turn into a big serious work!