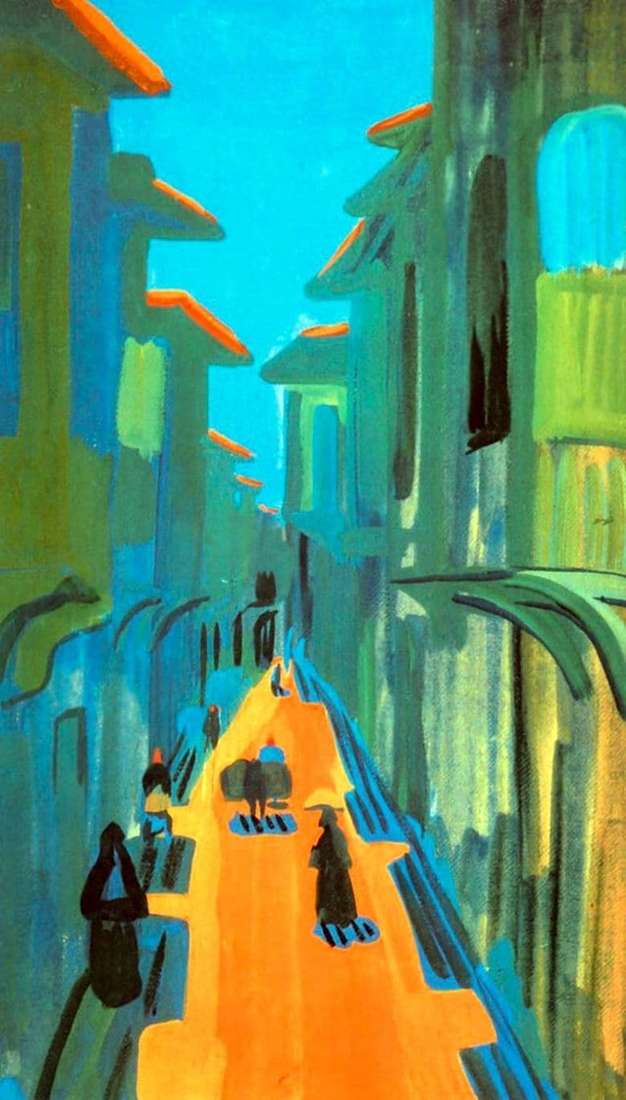 Martiros Saryan is an artist born in the south of Russia. Here he graduated from art school and wrote his first works that did not get much success. At 21, the young artist decided to go to his homeland, to Armenia, and then to the East. Since that time, began the worldwide fame of the artist. The painting “Street. Noon. Constantinople was written just in one of these trips.

The artist, who grew up in a cold, gloomy Russia, was incredibly shocked and amazed at the variety of colors that he saw in the countries of the East. In this picture we can see the incredible riot of colors that so conquered the artist.

Before us is a small street of Constantinople. Apparently, the order is already coming. The sky is still bright blue, almost blue, but the roofs of the houses are already painted with bright orange stripes of the setting sun.

Urban buildings the artist depicts mainly in blue. Somewhere in the palette is added ocher or some green shades. Apparently, this is how the artist wanted to show us that in the East, the blue sky is so bright that it is reflected in the facades of the houses. It is simply impossible to meet such species on the territory of Russia – the climate is not the same. And Turkey, Egypt, those countries where the artist visited, are full of such saturated colors.

The sky depicted by the artist seems to be bottomless, boundless and very deep. There is no color blending – a solid blue hue creates a sense of infinity of the sky. Bright contrast is the road depicted in the center of the work. An orange-ocher band narrowing in the distance. Bright elongated triangle, ripping the picture into two parts. There is practically no life on this scorched earth. Only occasionally there are several local women dressed in long Muslim clothes. In the middle of the road is a donkey with a load on his back.