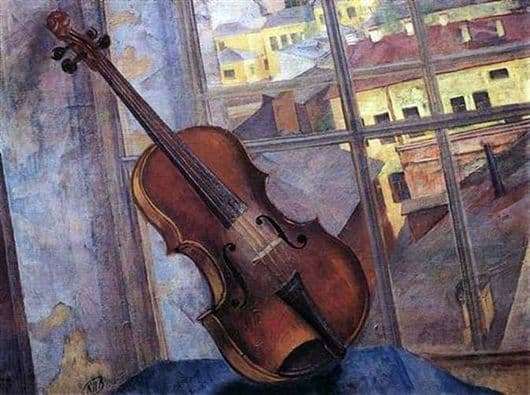 Petrov-Vodkin was a Russian cultural figure, painter and also a theater designer.

In his work he addressed the motives of religion, the pathos of the revolutionary struggle. The golden fund of Soviet art included many of his works in the still life genre. A lot in this genre, he worked in the years 1918 – 1920, when he created several beautiful paintings. So in 1918 he wrote the picture “Violin”, which belongs to this genre. This picture shows a love for the spiritualized, for music, as a way to distract from reality, and also depicts that real everyday gray life with the help of houses and other details.

The author said that still lifes are one of the hot topics during the conversation of the painter with nature, he compared them with violin sketches. At first glance, the picture depicts simple objects, but with the help of a peculiar vision of the artist, they help to create a special world, poetically transforming reality.

The violin is set at the window, behind it are seen numerous roofs, courtyards of the city, with the help of its elegant silhouette a musical instrument depicts this sad world, and from it receives a minor color.

This work pervades a single tense feeling that emanates from both the depicted musical instrument and the landscape outside the window.

Now this work is stored in the State Russian Museum of St. Petersburg.

The main feature of the artistic thinking of the creator was the comprehension of the universal laws of the existing forms in time and space and the desire to live “living life”.

To destroy the static perception of reality, the artist was engaged in building future prospects, as if trying to survey the image from various sides.

Each of his paintings has a certain meaning.