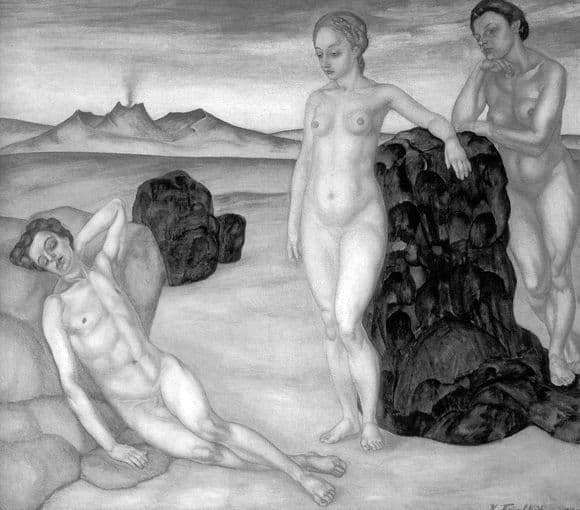 “Dream” was written in 1905, at the time of the deepest stagnation – as a country ready to rush into the abyss of change, but still awkwardly creased in the place, and the artist’s work. On it, right on the bare stones, a young man sleeps, completely naked, in an awkward pose, as if a dream had caught him suddenly, on the way or during prayer.

Above him, separated by black rock, as a kind of obelisk of doom, there are two – a gentle woman with pink skin and soft features, and a man, in the very form of which there is something bestial. He has a hard face, slightly pointy ears. He looks at the sleeper with thoughtfulness, which borders on thoughts about which side to start eating him: from his feet or from his head.

All this is surrounded by a lifeless, stony landscape, which includes a desert plain, a couple of black stones and distant mountains, one of which is slightly smoked by a stream of smoke, predicting a quick catastrophe. The sky is bright with tones of dark blue, hanging over the plain, almost touching her belly, and in general, the sensation is created unpleasant, oppressive. From such a dream, I rather want to wake up.

One of the most sensitive critics interpreted the picture as a reflection on the eternal questions about the place of the artist between evil and good, beauty and deformity. Woman is beauty, man is deformity. The woman is good. The man is evil. At the same time, the ugliness of a man rather implies the whole wildness of his appearance, than the fact that he is ugly with his face. An ugly resemblance to a beast.

The artist himself wrote that the picture was going on in a vague, terrible, indefinite time, when it was unclear, the country would collapse into the abyss, or rise from its knees, and it would be desirable not to have any particular outcome, but just to have at least something happen, the lethargic sleep finally broke off and something completely different began.