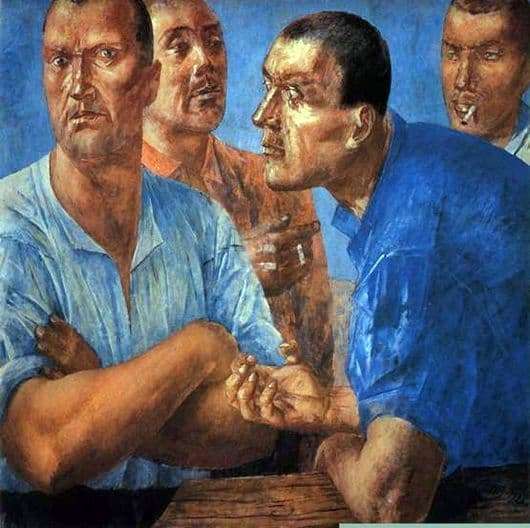 This artist was always at the forefront of the revolution, but nevertheless not all his canvases saw the light of exhibition lamps. There are those who were categorically forbidden by censorship, and there are those canvases that have become the personification of a new artistic revolutionary direction.

For example, “Bathing a red horse” is myself a bright work of the artist and it was she who was recognized throughout the world as the banner of the Soviet avant-garde.

But before us is a completely different canvas, not so large-scale, but very characteristic and bright. Before us are simple men, workers. No matter where they work, it’s important that they proudly carry this title. And here all the propaganda disappears and a canvas emerges, which is so ordinary and mundane that many critics were slightly shocked. Take a closer look at their faces and shapes. All four are powerful, strong and strong-willed men, but the characters are different.

The two are emotional ahead. One tells something, and the other listens incredulously, moving slightly away from the narrator and looking at us in confusion. Two others in the background, smoking and thinking about something else. About if they knew how the faces give way of thinking. One thought over something light and even smiles slightly, and maybe he overhears the conversation of the first two and chuckles slightly. But the fourth is painfully cunning, something he conceived, and this is something obviously dirty and unpleasant.

The artist did not glorify his workers, as many of his colleagues did. He did not even idealize them, as was fashionable at the time. He simply showed four strong men with their textures and with their real expressions on their faces. And not slick and some through, mind you, nice, like those of the same colleagues in the socialist realistic style. It seemed to him that it would be more correct and more honest. And even more truthful. And this is precisely why this picture was not so often shown to the public.