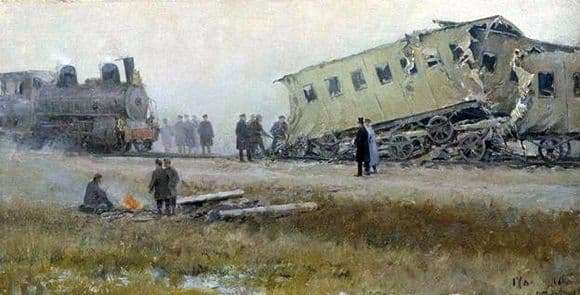 The painter Ivan Vladimirov was a favorite of the Soviet public. For his work in the genre of everyday and battle-painting, he often received gold or silver medals. He painted the picture “The Catastrophe” in 1900. It depicts a large-scale train wreck on a railway track. The canvas is made in gloomy gray-green colors.

It leads the viewer to sad reflections. About how helpless people are before the dictates of fate, which in a moment can turn huge compounds into piles of crumpled iron. And about whether this tragedy claimed human victims. Which is unlikely. People depicted in the picture, do not express excessive arousal.

The man and the woman, most likely, are a married couple, walking slowly along the crumpled carriage and calmly discussing the unpleasant incident. A group of men, perhaps, the working train of the train heats up by the fire, awaiting further orders.

Judging by the location of the transport on the rails, it can be understood that, for unknown reasons, the train, located on the right side, crashed into passenger cars at high speed, ahead of its train. As a result, terrible destruction occurred.

Cold gray sky adds to the drama. Thick white fog envelops all the space around. In a yellow, faded grass, in places, a donkey frost. This suggests that the action takes place in the autumn season, dreary and overcast.

Artist Ivan Vladimirov for his life more than once participated in the hostilities, as part-time he worked in the police. He took the plots of his paintings from personal situations experienced in the service, as well as from the difficult situation of the times of revolutionary Russia. The works of this remarkable painter were plausible for this reason. He subtly felt the events that he depicts.