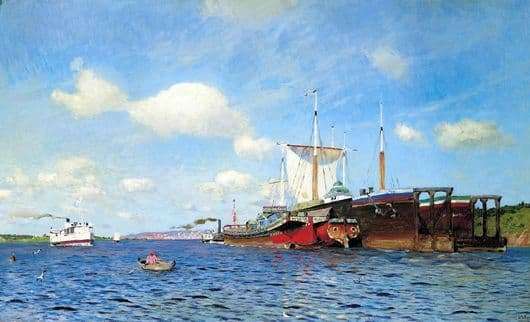 Isaac Levitan painted his picture titled “Fresh Wind. Volga “in 1895. The canvas was written for a very long time, and was completed only when all the hard work and searches gave their results. And the result was worth it, because the work was very deep and expressive.

This picture is one of the few of his paintings, which turned out to be extremely optimistic, which cannot but please the viewer who is familiar with his work, to this day. The picture is very rich in content, has some expressive tones and even elegance. The artist provides the viewer with the image of a full-flowing river in Russia, where life does not die away, boats move in swift jerks, and steamboats slowly and stately float. You can even feel how difficult the course of the steamer-tugboat, which is forced to tow two sloppy barges.

In the meantime, the weather remains good, which can be seen from accelerated clouds that glide across the sky, and in the meantime the sails of the barge are filling up with the wind more and more, accelerating its course. Nearby sails and painted boat, which adds elegance to the whole picture. A white steamer is moving towards the viewer, behind which there is also smoke from some other vessel. Meanwhile, the wind increases and white foam speaks about this, which forms on the surface of the water.

The color scheme is quite contrasting and is made in cold colors, mostly blue, the water shines perfectly with the green color of the shores. The sky is also filled with blue color of all shades, and thanks to the clouds, a feeling of large space and monumentality of the whole picture appears.

It is also worth adding that this work was the first landscape that the artist did not perform in a state of rest, but in motion.