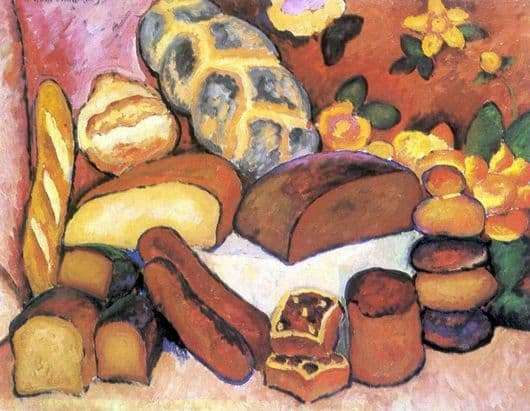 Mashkov is a great representative of the Russian avant-garde. He also worked in the genres of realism, cubism, post-impressionism. His works are considered as one of the most prominent representatives of the avant-garde art genre at the present time. Mashkov also became known as the founder of the Jack of Diamonds.

Ilya Mashkov created the work “Breads” in 1912. At that time, a large variety of products began to appear on the stores, inspired by this artist with his enthusiasm to depict his still lifes with bread. “Breads” – this is the usual Moscow bakery in the Smolensk market, available to any man in the street.

The artist Mashkov turns the created work into a festive event. Magnificent bread, rolls and loaves as if only from the oven. The color shades of brown, yellow, red convey the heat of freshly made fresh bread. From the picture it seems as though there is a smell of hot baking.

The jumble of a large abundance of bread captures the author. He brings ordinary food from our lives onto the canvas, as if inviting to enjoy the wealth and abundance of all sorts of pastries.

In this still life, Mashkov defies late impressionism, removing subtlety and elegance from his work. The construction of the composition of a still life is quite conscious, in which the clarity of the forms and the materiality of the objects appear.

The artist’s works are distinguished by high energy, dynamic composition. Mashkov wrote an art canvas in relief strokes, recreating the real world of material things. After this work was followed by a series of still lifes depicting bakery products – “Moscow Sned. Bread “and” Soviet bread. “

Pictures of the artist are in such famous museums as the Tretyakov Gallery and the Russian Museum.