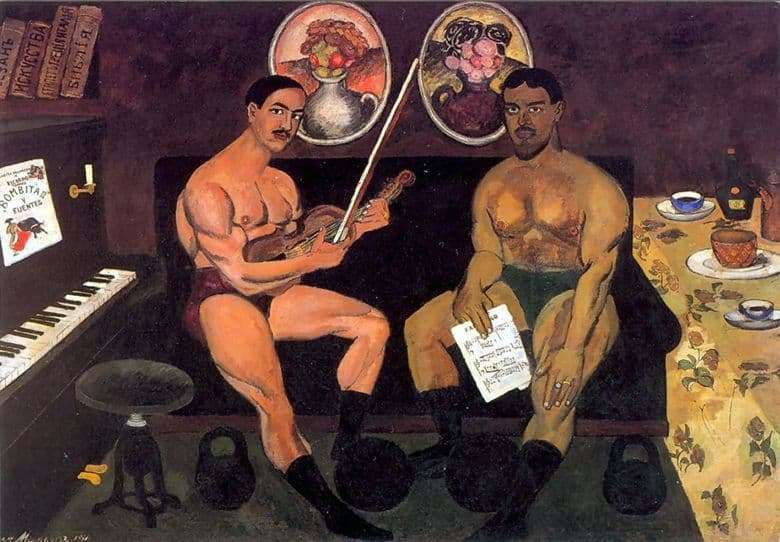 The most interesting canvas, which undoubtedly deserves the attention of the audience, is “Self-portrait and portrait of Pyotr Konchalovsky”. The picture is painted on a huge canvas, where the artist and his friend Petr Konchalovsky are depicted. The painter decided to portray the heroes of the canvas as two athletes who are sitting on the couch.

The highlight of the picture is not just sitting athletes on the couch, but two, strong guys who perform romance. Mashkov has a violin in his hands, Konchalovsky only has notes.

Art critics refer the picture to the bogey, dramatized art. Heroes appear to the attention of the viewer open, cheerful, addressed to all of us. The artist arranged them as if they were on the front of the stage. The only thing that creates the effect of ramp destruction is the enormous size of the canvas.

It seems that the painted characters of the picture seem to be getting ready to leave the canvas, while inviting the viewer to participate in the presentation that is about to begin. Interesting is the fact that the artist decided to portray the athletes who are engaged in music.

Mashkov was not calm, he could easily rebel, he was the one who dared to turn to the signs, carved beautiful toys, stucco, aesthetics of balagan action. His style of writing of an unusual canvas strikes him – it has gigantic dimensions. Hypertrophied outlines, which the author has circled in a dark outline. Athletes are depicted on the background of books, weights and dumbbells. Placed cups on the table indicate that friends-athletes after drinking tea, we decided to use music.

As Mashkov himself said about the style of writing his picture, he had a desire to destroy the entire dead-written world, so that his work sounded like an organ, he wanted to lead society to a true understanding of art. The painting “Self-portrait with Konchalovsky” was written specifically for the exhibition of the author.